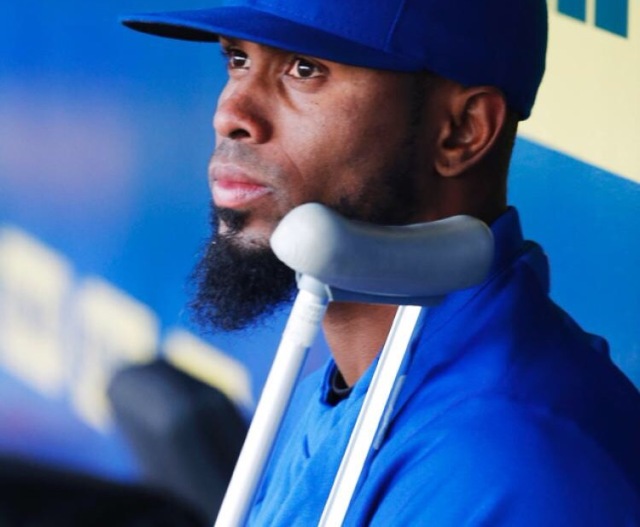 Reyes Injured (The Lock of Locks): Let’s start with the lead story. Jose Reyes didn’t play game 2 of the doubleheader after the Mets had said pregame that Jose and Yo would play both games. And the reason is…he’s officially injured. Grade 1 intercostal strain. Hammy, quad, intercostal. Who cares? Jose is more injury prone than Travis d’Arnaud. The safest bets going in the world yesterday were U.S. Treasuries, Golden State vs. Cleveland in the 2017 NBA Finals, and taking the under in the “Jose Reyes to the DL by July 31st” pool. The only bet that is more of a lock now is the Mets waiting too long to put Jose on the DL. Although I read Dilson Herrera was scratched from his Vegas start last night. So maybe the Mets are already preparing for his promotion.

As far as the doubleheader goes, the Mets split the twin bill which is fine by me. The Mets lost the day game to Carlos Martinez and won the night cap with Big Sexy on the mound. And the Nationals lost in embarrassing fashion last night. Papelbon blew the game. So all in all it was a good evening.

Game 1 Recap: The Cardinals won game one 3-2. Noah Syndergaard wasn’t at his best in this game. He wasn’t getting ahead of hitters and had a high pitch count. He miraculously worked 6 innings despite having over 100 pitches after 5. He made a mistake to Jedd Gyorko in the third inning and Gyorko hit a two run homer. But the first Cardinal run came in the second inning. The Cardinals hit three straight one out BS singles. Two were infield hits. One was a slow roller to Jose Reyes. The “single” that loaded the bases was deflected by Noah Syndergaard and consequently a play couldn’t be made. Then with the bases loaded, pitcher Carlos Martinez hit a ball back to Thor, and he made an error on the throw home. Horrendous. Thor wiggled out of the inning after giving up only that one run. But that run plus the two run homer by Gyorko was enough for the Cardinals.

The Mets left 11 men on base. Basically they left men on base every single inning. Tim Teufel held Reyes at third base on a Yoenis Cespedes double in the third inning. That was a blunder. In the fourth inning, Rene Rivera hit a two run homer which represented the laugh out loud 2 run scoring total for the Mets in the game. Kelly Johnson failed in big spots. Even Yoenis Cespedes failed in some spots during this game. He also came to bat in the 9th inning after Curtis Granderson led off with a single. He swung at the first pitch and almost hit a two run homer to center field. It ended up being a deep fly out. Then for some reason Grandy tried to tag from first base and was thrown out at second. It was one of many odd lowlights in a weird embarrassing first game.

Game 2 Recap: The Mets won 3-1. Bartolo Colon was efficient and Sexy. He pitched 7 innings, gave up 3 hits, 1 run, and struck out 8. He made one mistake to Jedd Gyorko who hit a solo shot. Jedd Gyorko with two home runs? The Mets love getting crushed by odd players. We always have some new obscure nemesis. Terry yanked Colon from the game after 7 innings with only 87 pitches. This made no sense at the time, but apparently he’s going to pitch on short rest this coming Saturday. Addison Reed and Jeurys Familia shut down the Cards in the 8th and 9th so it worked out.

The Mets did manage to get one clutch hit in game two. Asdrubal Cabrera broke his 0 for 32 streak of ineptitude with runners in scoring position with an RBI double in the the third inning to make it 1-1. But the Mets still left 5 runners in scoring position. James Loney hit into a double play to score a run in the fourth inning. Cabrera added a sac fly in the fifth inning to make it 3-1. The Mets crummy offense didn’t matter as much in game 2 because the pitching was so elite and efficient.

Citi Field Food Recap: So I arrived at the stadium yesterday around the 6th inning of game one. Let me preface this by saying I am a big fan of the food at Citi Field and a big fan of chef David Chang’s Momofuku restaurants. That being said, I bought the spicy chicken sandwich and fries at the Momofuku stand at Citi. Meh. It wasn’t anything special. And it was 30 dollars for the sandwich, fries, and a beer. Too rich for my blood. Never again. I’ll stick with Shake Shack or a sausage with peppers and onions.

Today: Do the Mets want to make a run? Do they want to make some noise in the NL playoff race? Well then we need to win a home rubber game against a Wild Card opponent. Logan Verrett vs. Adam Wainwright in today’s rubber game. Let’s go Mets.

One thought on “Mets Split Doubleheader; Reyes Injured (The Lock of Locks)”