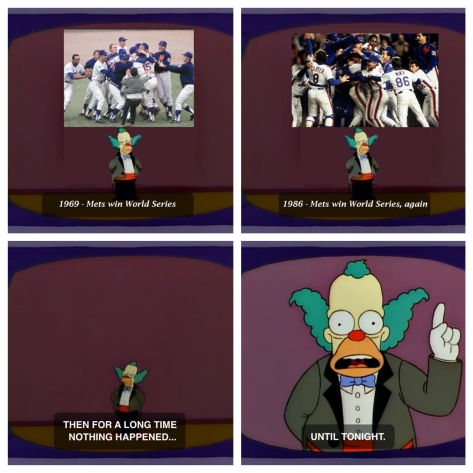 Once in a great while we are privileged to experience a sporting event so extraordinary it becomes part of our shared heritage.

That’s right folks, the April 10th 2018 Mets are 9-1, and I think we can already declare this team the third best squad in franchise history.

At a minimum this smokin’ hot 9-1, salt and pepper Mets squad has already qualified for the all-time Mets team tournament of champions. It’s a sad statement about the history of the franchise but it’s true.

Can we just end the 2018 season now and play the Astros for all the marbles? Please? Please God just let us play in the World Series now. This is the pinnacle. This is it. It ain’t getting better than 9–1.

I can’t believe the secret formula for (brief April) success was:

70 win 2017 team + 2 healthy MVP candidates (Michael Conforto, Yoenis Cespedes) + 2 healthy Cy Young candidates (Jacob deGrom, Noah Syndergaard) + Todd Frazier and his salt and pepper gimmick – a moron manager who didn’t believe in analytics and had no idea what he was doing (Terry Collins) + a manager who will do whatever the front office computer printout says and also seems nice (Mickey Callaway) – a trainer (Ray Ramirez) who seemingly had Munchausen syndrome by proxy and was somehow keeping the entire team sick on a regular basis.

That’s all it took baby! It’s impossible not to enjoy the start of this season. Mets fans get to watch an elite New York Mets team play .900 baseball while the Yankees struggle (a little) and deal with a Mets-like injury report. It’s the pinnacle of happiness in Flushing. Sad.

I plan to enjoy every second of this run until the wheels inevitably fall off. Or maybe the Mets will go 161-1 and matchup against the inexplicably smoking hot .800 winning percentage (supposedly tanking) Pittsburgh Pirates in the NLCS. Not bloody likely.

Here are some quick notes on the first 10 games:

Enjoy the winning now Mets fans. What goes up must come down, and we all know how painful it is to hit every branch of the loser tree during the free fall. Soak up all these good vibes now, while they last.