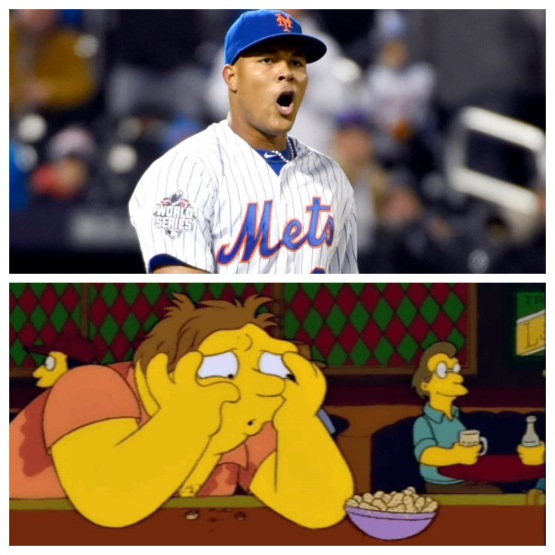 On a night where Yoenis Cespedes heroically gave the Mets a 4-3 lead with a 7th inning two run homer, Jeurys Familia finally blew a save. The Mets did their “never hit with runners in scoring position” thing for 6 innings. Then Yoenis Cespedes hit his home run, and at the time it felt like it could be one of those season changing clutch shots. Then it all came crumbling down in the 9th inning, and the Mets reminded us all that they are nothing but pretenders so far this season. We never get the happy script. It’s always the Shakespearean tragedy. The blown save couldn’t have come at a worse time. I felt like Barney Gumble in The Simpsons when he’s forced to be the designated driver, and he’s losing his mind at the bar as Homer and the boys get ripped. Then Duffman and the party patrol randomly show up because Barney had sent in 10,000 Duff labels, and it happens to be on the night he can’t drink.  Not tonight! Not tonight!!!!!

Quality Start: Logan Verrett pitched 7 innings, gave up 3 runs, 5 hits, 3 walks, and struck out 7. It was a quality start, and you can’t ask for more from a fifth starter in a big game against a Wild Card contender. Flush that quality start down the toilet with the rest of them.

We Suck: It was the same story in this game as every game. We had unlimited opportunities and failed almost every time. 12 hits!!! We were 1 for 11 with runners in scoring position before Yoenis Cespedes came up in the 7th inning.

Yo Saved The Day: Neil Walker hit an RBI single in the second inning to make it 1-0. Walker had 3 singles and a walk in this game. It was nice to see him do something at the plate for the first time this month. Once the Cardinals scored 3 runs off of Logan Verrett, it felt like that was going to stick. In the 7th inning, Travis d’Arnaud and Alejandro De Aza hit back to back singles off of Adam Wainwright. Then Curtis Granderson and Asdrubal Cabrera struck out back to back with runners on first and third. Same old story.

Fortunately for the Mets, Wainwright threw a wild pitch with two outs and d’Arnaud scored making it 3-2. A nice gift run. I suppose Wainwright decided to pitch to Cespedes because it would have been his final batter of the night. I still think it’s a dumb decision to give Yo anything to hit if you can avoid it. But Yo had one of the best ABs of the season and hit a two run homer off a Wainwright curveball. The homer had the stadium rocking. Yo hadn’t hit a homer since early July. Wainwright hadn’t given up a homer in months. Ridiculous.

Familia Blew The Day: Addison Reed shut the Cardinals down in the 8th, and then Familia blew the game. He gave up 2 runs. I won’t even get into how he blew it or nitpick his pitch selection. He walked two batters. He should probably stop doing that. But he hasn’t blown a regular season save since last July. It just couldn’t have come on a worse night.

Stink: In high school, my gym teacher once turned to a group of sweaty teenagers and encouraged everyone to take a shower because “You stink. You stink like shit.” That’s how I feel about this group of Mets after that loss. As Forrest Gump once said, that’s all I have to say about that.

Today: Oh great a day game against the Rockies. Who cares? I can’t wait to watch the Wilpons force Sandy make an ill-advised trade of a bunch of our top prospects for Jonathan Lucroy.