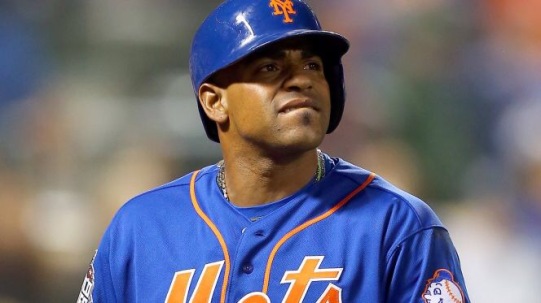 It’s early, but so far the Mets’ offseason highlights are:

1) Eric Campbell was “cut” (and he wasn’t really cut he was just removed from the 40-man roster and sent to Vegas so he’ll be back).

2) Tim Tebow slammed into the outfield wall trying to make a catch during the Arizona Fall League. And it won’t be long before Tebow jerseys dominate the racks at Modell’s and the Cespedes jerseys are out of stock.

3) The Binghamton Mets have been renamed the “Rumble Ponies” as a result of a fan vote. Frankly, I’m surprised the Wilpons didn’t sell the naming rights and force us all to watch the Binghamton Citi Preferred Platinums.

The rest of the Mets’ offseason has basically followed the anticipated script. The Mets picked up Jay Bruce’s one year 13 million dollar contract option which was a no brainer. Now we can listen to certain fans continue to complain about the Mets choosing to play slugging outfielder Jay Bruce over the unproven Michael Conforto. The Mets picked up Jose Reyes’ contract option which pays him the league minimum salary. After all, they did their due diligence on his off the field “mistakes” and they had no problem with any of them. But trust me, if they had to pay Jose Reyes 10 million dollars instead of the league minimum they may have had a problem with some of his off the field “drama”.

We have extended qualifying offers to Yoenis Cespedes and Neil Walker. #Mets pic.twitter.com/z6G8uQC92x

I think there’s a chance Neil Walker accepts the qualifying offer and becomes Neil Walkyear 2.0. The uncertainty around his back injury makes the one-year “prove it” deal so appealing. I suppose he could reject the offer, do a showcase for interested teams, and hope that he gets a multi-year offer. But if he can play next year for the Mets, have another big season and stay healthy, he could come back next offseason and potentially score a 4 or 5 year contract.

Then at the GM Meetings, Sandy Alderson finally addressed the media. And as expected, the Yo news was no news. Sandy said the Mets would like to retain Walker and Cespedes and didn’t really elaborate beyond that. I suppose it’s a positive thing that he said the Mets want Yo. That’s nice.

In my opinion, it was an enormous mistake to let Yo test free agency. The Mets already passed on a chance to lock him up and prevent the whole free agency process. Now that he’s available to everyone, I genuinely feel it’s only a matter of time before a lone wolf crazy bidder gets into the mix and steals him from the Mets.

On the flip side, the Mets only have two players on the roster signed to guaranteed multi-year deals (David Wright and Juan Lagares). They have plenty of flexibility to retain Yo on a big contract and don’t let anyone tell you otherwise. Plus, with Matt Harvey having injury problems and Jeurys Familia being arrested for domestic violence, I think it’s less likely that the Mets commit to them long term. So that should theoretically free up even more money to allocate towards a deal with Cespedes. But whatever. The Mets are going to do their cheap negotiating tactics no matter how much I complain.

As much as I love the Hot Stove, I’m going to make an effort this year to remain emotionally disconnected from the Mets’ news cycle (spoiler alert: I’ll fail). But obviously I pray that the free agency gods smile upon the Mets and deliver us Yo like last year because in the end, the Yo news is the only news that matters.