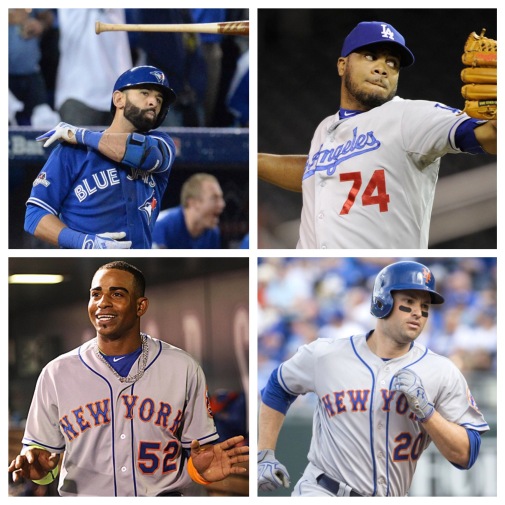 The most significant news coming out of Sandy Alderson’s address at the GM meetings on Monday was that the Mets supposedly want to retain Yoenis Cespedes and Neil Walker and:

"I don't think we have any absolute parameters." Alderson on where Mets are willing to go with Cespedes

If you accept that quote, then you believe the Mets will have the necessary financial resources to sign Cespedes. If you doubt that quote, then you’re probably used to hearing the Mets feed us lines like the one above over the past few years. Let’s see how it plays out, but the Cespedes to the Nationals/Yankees rumors are already starting. Get your antacids ready. It’s going to be a long offseason.

Other than the ambiguous Yo news, we heard a few more news nuggets to kick off the Mets’ Cold Stove.

Unclear on interest level, but one free agent right-handed-hitting outfielder the Mets have at least inquired about: Jose Bautista.

I saw this tweet and my first thought was “I’d love to have Yo and Bautista mashing dingers in the Mets’ outfield.” Then I remembered the Mets aren’t a true big market club like the Cubs/Yankees and Bautista would be considered as a replacement for Yo not a complement. In that case it’s a hard no from me. I have no interest in signing an older, less mobile version of Cespedes. Pass.

Alderson was asked about Colon. He mentioned Mets’ pitching depth. So, re-signging him doesn’t seem like a high priority.

The Mets, like any competitive team, should want to bolster or at least maintain their pitching depth in the offseason. Seemingly we feel the best way to do that is by letting our most durable and reliable starting pitcher leave via free agency. Bye bye Bartolo Colon. Pray that he’s willing to take a one-year discounted deal with the Mets once again. Pray.

The Mets Hot Stove is really sizzling. Oh boy do we love our internal options. Robert Gsellman and Seth Lugo it is!!

Alderson says the Mets are unlikely to pursue a higher-tier bullpen arm.

The Mets will probably lose Jeurys Familia for a third of next season once he’s suspended for his domestic violence arrest. Our bullpen needed some depth before Familia’s potential suspension. So what’s the move? Apparently it won’t be to replace him with another “higher-tier” reliever like Kenley Jansen or Mark Melancon. Sounds great. Just bring back Jim Henderson or some other low impact arm and get it over with already.

Greg Holland would be a great guy to take a flier on. I’m shocked we sent a scout to see him. I’m guessing the scout got right back on the plane once he found out it’ll take more than a spring invite to sign Holland.

Improve Catching by Doing Nothing:

Said earlier Mets weren't playing in catching market. Alderson says focus is improving what they have. That would be Travis d'Arnaud.

Travis d’Arnaud was terrible last year. Kevin Plawecki has shown nothing at all in two seasons filling in for Travis. Rene Rivera was a great receiver but can barely hit over .200. What’s our plan to improve at the catching position? Apparently we’re going to pray that the results change with the same personnel. Exciting stuff.

So far there’s been no surprises in Mets land. I already wrote about the Mets annual Cold Stove and the fact that Sandy is just hoping to double down with the same roster in 2017. The Cold Stove reality was reinforced when it was reported that the Mets are unlikely to make a splash if Yo departs via free agency. I’m still crossing my fingers for some Mets’ offseason fireworks. But for now it looks like we’re just “interested” in everything and planning to do almost nothing as usual.

2 thoughts on “Mets Are “Interested” In Some Top Free Agents”