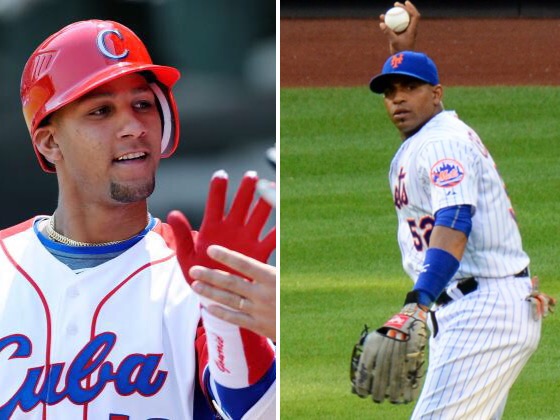 In the least surprising news of all time, the Mets passed on signing free agent Cuban infielder Yulieski Gurriel (formerly spelled Yulieski Gourriel). He plays second base and third base and was touted as the best international talent available in the market. But the Mets don’t have a need at either of those positions. We already have our studs Wilmer Flores and Jose Reyes. I mean let’s be reasonable here. We have all these infielders signed to expensive long term deals. How can we possibly fit any other infielders on our roster? And by “all these” I mean just David Wright who may never play another game again. The Mets infield logjam is a real problem. We can’t go complicating things by adding another talented body.

Instead, Gurriel goes to the Astros on a 5 year deal worth $47.5 million dollars. The Astros have an abundance of infielders on their major league roster and Alex Bregman their top position player prospect is also a middle infielder. Obviously the Astros GM has lost his mind. How will his team possibly accommodate all these talented players? There’s simply no way to do it. If the Mets have taught us anything this year it’s that maintaining a deep roster is simply too risky. A team is much better off playing short-handed every single week and being forced to address roster deficiencies during the season by trading pitching prospects for Kelly Johnson.

Plus the Mets don’t want to violate MLB’s strict “one Cuban All-Star per team” policy. I know Yo wanted Gurriel to join the Mets very much. But he just doesn’t understand that rules are rules. One star Cuban per team. That’s it. I’m sure he’ll be disappointed. Also it’s hilarious that the Mets completely ignored the plea by Cespedes. He came to them and said this guy is the real deal and the team should sign him. Cespedes is rarely vocal about anything with the media. He went out of his way to express his feelings about Gurriel. What did the Mets say to that? Nope! Pass!

This is 100% foreshadowing the Mets 2016/17 offseason Cuban relations. Don’t be fooled people. Yoenis Cespedes opting out of his current contract is an absolute lock. There is no way in hell the Mets are going to give him the long term deal he wants and deserves. And you can rest assured that some team is going to give him his money this time. If his unproven former Cuban teammate is getting 10 million a season over the next 5 years, I guarantee you some team is giving Cespedes (who’s younger than Gurriel and a major league All-Star) 25 million a year over 6 years. I know everyone said that last offseason Cespedes would get paid. But last offseason it was pretty obvious that Cespedes wanted to stay in New York more than anything. The World Series trip was so fresh. He just couldn’t get over that feeling and pass on a chance to try and get there again. I’m sure that feeling will wear off by the end of this season. Plus he’s going to need extra cash considering he’s spent his entire 2016 salary on horses, pigs, and sports cars.

Speaking of Cespedes, he tried running the bases today and his quad injury hasn’t healed. I can’t decide what’s more likely. He’s either going to sit for 15 days on the active roster and then come back, or the Mets will pinch hit him tonight and he’ll re-aggravate the injury thus making it impossible for the team to backdate the DL stint. Whatever. I’m just going to assume the Mets passed on this new Cuban to save their money for Cespedes. Because if the Mets let Cespedes walk away from the team, we all should do the same thing.

One thought on “Mets Pass On Cuban Star; Prefer To Have One”