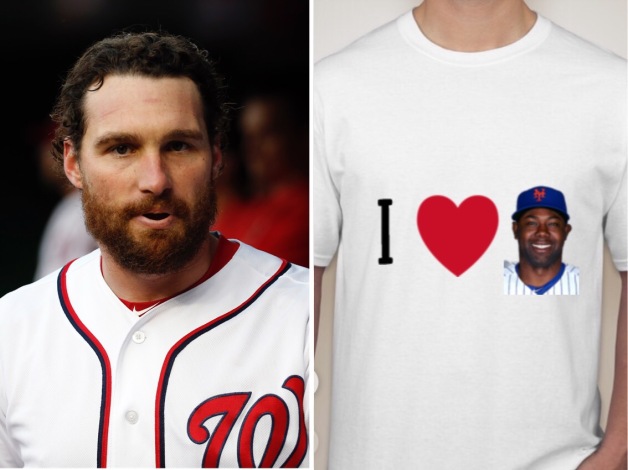 At this point, the Mets 2016 season has hit “rock bottom” too many times to even count. The term “rock bottom” has lost all meaning. But the outcome of this game goes much deeper than a simple loss. The recap is quick and simple. Daniel Murphy hit a solo home run off of Logan Verrett in the second inning to make it 1-0. Jayson Werth added a sac fly in the third inning and Murph added a two run shot in the 8th inning off of Sean Gilmartin to make it 4-0. The Mets never had a real opportunity off of Max Scherzer in this game. Scherzer was pulled in the 8th inning after going 7.1 scoreless innings and striking out 10. In the 9th inning, Yoenis Cespedes singled and James Loney hit a two run home run to make it 4-2. Yeah that’s right. James Loney our 2016 cleanup hitter launched a home run.

METS Disease: This wasn’t just some pitchers duel with a few key home runs. This game served as a reminder for all Mets fans how real the franchise curse is. It reminds all Mets fans how real METS disease is. We watched both phenomena happening simultaneously on the field. It’s been genuinely hard to watch Alejandro De Aza step into the batter’s box in 2016. He’s hitting .158/.208/.232 on the season. He is arguably the best example we have in 2016 of what METS disease can do to a player. De Aza is a man who once had major league skills and abilities and now he has none of the above. De Aza came to the Mets with a career .263/.326/.398 batting line. In his career he had success against right handed pitching to the tune of a .743 OPS.

All those skills and credentials became meaningless once he signed with the Mets. As soon as his pen hit the dotted line of his Mets contract he was instantly infected. Alejandro was no different than Chris Young or John Mayberry Jr. These were all players with decent major league resumes. They had known skills. They were versatile outfielders brought in to play a bench role. But with the Mets they couldn’t even make contact in batting practice. With METS disease you inexplicably lose your skills or you lose your health. In rare cases you lose them both at once (e.g. Michael Cuddyer). In last night’s game, De Aza came to the plate in the 8th inning with men on second and third and two outs. He struck out against Shawn Kelley in pathetic fashion. De Aza will suffer the same fate as Chris Young and Mayberry. He will be released mid-season. Goodbye Alejandro. Take some time off to recover from the METS and go rejuvenate your career somewhere else.

Mets Curse: The Daniel Murphy storyline is where we had the opportunity to see the Mets curse happening live. For Mets fans, his success is the least surprising thing of all time. The Mets spent the better part of two years trying to trade Daniel Murphy for a mid-level prospect. Gary Cohen once went on TV and referred to Murph as a “net negative”. We all know what Gary meant. Murph was an above average major league hitter, with limited power, and was an absolute liability at every single position. He cost the Mets games with defensive gaffes all time time. Sure we all saw him carry the team to the World Series with tons of dingers. But we also saw him Murph it up defensively in the World Series. We all knew Murph never hit more than 14 homers. Murph never posted an OPS higher than .770 in a season where he had more than 500 ABs.

Murph was an average to slightly above average hitter. That’s not an opinion. It’s a fact based on his pre-2016 career numbers. We all watched the guy for 7 years. Well he’s not average anymore. He’s having an MVP season. He’s now an MVP candidate and a Met killer for life. That’s not natural. No I’m not attributing it to steroids. It’s just the Mets curse. It’s the way things work. We’ve seen it all before. And now the curse is manifesting itself yet again in the form of Daniel Murphy.

The Takeaway: The only takeaway I have is to never forget. Never let a World Series run or some run of short lived success fool you when it comes to the Mets. The Fans Remember. We must remember the team that we root for and everything that goes with it. It’s not a matter of the fans being cynical or pessimistic. We’ve all seen METS disease and the Mets curse play out a million times in a million different situations. It’s not pessimism. It’s realism.

Today: The Mets open a home series against the Cubs today. Don’t be fooled. Don’t think for one second that anything that happened in the 2015 playoffs will have any impact on how this weekend series will play out. The season is unraveling. It’s all unraveling. The sky is falling. The Cubs are going to dance on our pre All-Star break grave.

3 thoughts on “De Aza And Murph: The Curse Reminder Game”