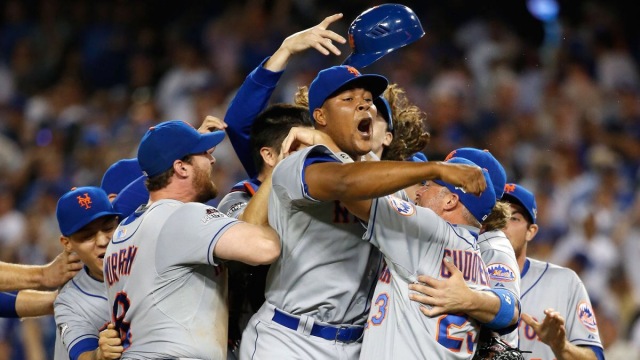 The Only Injuries That Matter: I wanted to lead off on a positive note after a two game series sweep. I really did. But Yoenis Cespedes and Noah Syndergaard are both being examined at the Hospital For Special Surgery right now. Cespedes left the game after the fifth inning with left wrist discomfort. I’m sure it’s just some poisonous spider bite that will lead to his wrist falling off. No big deal. And Thor left the game after battling through six mediocre innings with elbow discomfort. Yeah an elbow problem. Just like Steven Matz and Zack Wheeler had recently. Greaaaat. Now we wait and see if the season is over. Yo and Thor are the two best players on our team. They are the only injuries that matter. Pray.

On To The Game: Other than the potential season derailing injuries to Yo and Thor, the Mets finally won a series against the Royals. We beat the Royals in June. Perfect timing. Sure it’s a depleted Royals squad missing Alex Gordon and Mike Moustakas, but injuries are not a valid excuse when you’re playing the Mets. This was a big series win after such a brutal weekend against the Braves. And the Mets were able to win both of these games without stellar starting pitching performances. First Bartolo went down with an injury yesterday, and today Noah Syndergaard struggled due to elbow discomfort. But he still battled through 6 innings, gave up 8 hits, and 3 runs. He only struck out 4 Royals. He blew two leads. He blew a 1-0 lead in the fifth inning when he gave up a solo shot to Cheslor Cuthbert. Then in that same inning he let the Royals take a 2-1 lead when Jarrod Dyson singled, Danny Duffy sacrificed him over to second base, and Whit Merrifield hit an RBI single. He blew the lead for the second time in the 6th inning when Salvador Perez doubled, and Paulo Orlando drove him in with an RBI single to make it 3-3. But the Mets were able to score enough to win and the bullpen pitched three scoreless innings. Jerry Blevins and Addison Reed were the bridge to Jeurys Familia.

Loney And The Soup Apologists: James Loney hit a two out RBI single in the fourth inning to make it 1-0. Loney’s line before the game was at .292/.338/.417. I’ve seen a lot of people complaining about James Loney. I’ve even seen people arguing he’s not a real upgrade over Eric Campbell. I don’t care that it’s a small sample size. If you’re still saying he’s not an upgrade over Soup you’re wrong. I’m not saying he’s a star. I’m not saying he’s the answer at first base. But Jesus Christ he’s better than Soup.

Asdrubal Is Today’s MVP: I don’t know if he got the Michael Cuddyer belt, but Asdrubal Cabrera had quite a day. He scored on the James Loney single and had a nice slide at the plate. He hit a two run homer in the fifth inning to make it 3-2 and retake the lead for the Mets. He even made some nice plays at shortstop.

Reynolds In LF?: Terry played Matt Reynolds in left field for the first time in his career. Terry has no fear throwing a rookie with no experience in the outfield, but he won’t consider calling up Dilson Herrera and putting Neil Walker at third base? Kind of absurd. Oh by the way Matt Reynolds hit a solo home run in the 6th inning to make it 4-3 and that was the winning run for the Mets. Lucky Terry. He’s a genius.

Pitching Injury Update: Zack Wheeler got his elbow examined today after it flared up during his rehab. No word from the Mets on that yet. Thor also went to the hospital after the game for an elbow exam as I mentioned above. After getting rocked with a liner off his thumb, Bartolo is apparently fine and ready to make his next start this weekend. He’s indestructible.

Tomorrow: The Mets head to Atlanta for a four game set. They really need to make up for that horrendous sweep at Citi Field. Light your candles for Thor, Wheeler, and Cespedes. The season could be over if those MRIs don’t go our way.

One thought on “Mets Sweep Royals! In June…”