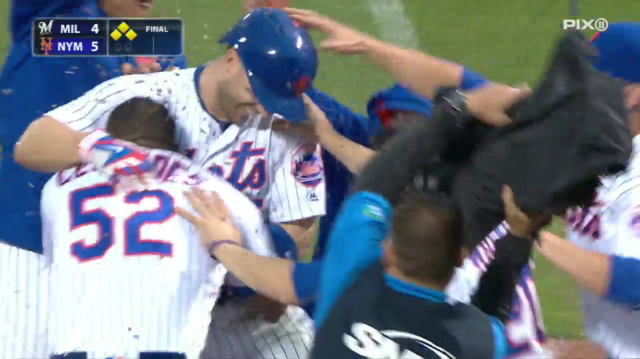 Wright Walk Off: David Wright with a walk-off single in the bottom of the 9th inning is about as feel-good a victory as there can be. Unbelievable. Watching Yoenis Cespedes nearly tackle Wright and uncontrollably smile as the entire team celebrates on the field is truly special. We really needed a win like this.

Brewers Are A Godsend: Umm the Brewers are absolutely terrible. The Mets needed a matchup against a garbage team so badly. I mean let’s start with the 9th inning. They issued a leadoff single to Eric Campbell. Baaahahaha. Then they walked Kevin Plawecki who spent half the AB trying to bunt and failing. Matt Reynolds came up next and effectively executed the sacrifice bunt. Grandy was walked intentionally to load the bases, and then David roped his single on a 3-0 pitch to get the 5-4 victory. The Brewers nearly walked in the winning run anyway. They walked six Mets over the game.

Grandy Mendoza: In the first inning, Curtis Granderson hit a leadoff home run. He absolutely loves doing that. Too bad he’s hitting .197 on the season. The Mendoza line is a Mets favorite. Grandy is under it (.197), Wright is approaching it (.223), Kevin Plawecki is at it (.203), and Alejandro De Aza is too (.205).

DeGranted: I really take Jacob deGrom for granted. I just assume he’s going to jump on the mound and mow every team down. But he really didn’t have it yesterday. He struggled to get through 5 innings, he gave up 5 hits, issued 3 walks, and gave up 4 runs. His 7 Ks combined with the walks really drove up his pitch count. In the top of the second inning he walked Aaron Hill and with two outs gave up a two run home run to Ramon Flores to make it 2-1 Brewers. In the top of the 4th inning, deGrom walked the leadoff man and then surrendered a single. With first and third and nobody out, Ramon Flores hit a sac fly making it 3-1. Then pitcher Zach Davies executed a sac bunt (which the Mets staff still can’t do), and Jonathan Villar followed that with an RBI single to make it 4-1 Brewers.

Cespedes Saved Us Per Usual: In the fourth inning, Yoenis Cespedes singled with one out and advanced to second base on a Brewers wild pitch (they stink). Then Neil Walker struck out and with two outs, Asdrubal Cabrera drove in Cespedes with an RBI single. Then in the bottom of the 6th, the Brewers walked Michael Conforto with one out and Yo followed that with a two run shot. He’s just an unstoppable force. He should probably be walked every single time he steps to the plate. He’s quietly on pace to hit like 54 home runs which would be completely insane.

Electric Pen: Hansel Robles, Addison Reed, and Jeurys Familia combined for 4 scoreless innings of relief and 6 Ks. The pen has been electric. There’s no doubt about it. Pray that their arms don’t fall off.

Duda Dead: Lucas Duda was scratched with back pain again. He got an MRI and they think it’s a disc issue. He’s not playing in the series finale either. The DL is an absolute lock. Well so much for our plan to not have a contingency plan at first plan. Hooray! We have literally no option. It’s Soup. That’s it. We may need to consider calling up Dilson Herrera for second base and moving Neil Walker to first base even though he’s never played there before. Slowly the injuries are piling up. Pray.

Harvey Time: They said Matt Harvey had a great weekend bullpen session and is going to start in Washington on Tuesday. I suppose if Wright’s corpse can get a game winning hit then Harvey can have a rebound start.

Today: Man we really lucked out with Ryan Braun missing the first two games of the series due to injuries. Noah Syndergaard on the mound for the sweep? Yeah I like those odds.