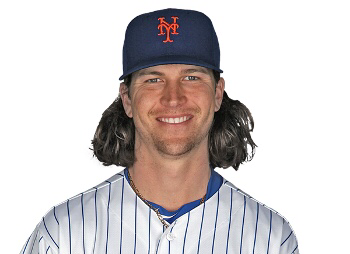 Thank you sweet Jesus for my man Jacob deGrom. The Mets needed to win this series in Philly real bad. Keith Hernandez called it a “must win” since the Nationals expanded their division lead to 7 games last night. And Jacob deGrom delivered in the biggest way possible with a complete game one hit shutout. It was the first complete game of deGrom’s career which is kind of insane considering how fantastic he’s been since his debut in 2014. With the Mets offense being as bad as it is, it often feels like a complete game shutout is needed for this squad to stand a chance. Well we got what we needed today. Jake told Terry at the All-Star Break that he felt gassed. I think these days off obviously helped him. He’s the ace we need for the dog days of summer. I fully expect him to continue his dominance the rest of the way. Also, the only hit against deGrom was by the Phillies starter Zach Eflin. Of course.

He’s Hot So He Plays: In the second inning with one out, James Loney singled and advanced to second on a throwing error by Zach Eflin. Then Juan Lagares hit a two out RBI triple to right field to make it 1-0 Mets. Juan Lagares has been hot at the plate lately. Juanny is hot, therefore he plays until he’s not. It ain’t rocket science folks. Plus Yoenis Cespedes‘ legs have been barking all season, and he thinks playing center field has put additional strain on the legs. Terry said postgame that Yo prefers left field. Soooo that means we’ll play Juan Lagares our hot hitting gold glove center fielder a little more this month. Fine by me. Yo is our best player, and we need to accommodate him in every single way. Michael Conforto also didn’t start in Vegas today. There’s been some rumors that he may get called back up to the big club for the Cubs series. Whenever he gets the call, we’ll find a way to play everyone. I’m not too worried about it.

Double Steal: In the 5th inning with two outs Jacob deGrom singled, and Jose Reyes drove him in with a double making it 3-0 Mets. Then Curtis Granderson walked, and Cespedes came up with two men on base. Before Cespedes had a chance to do some damage, Jose Reyes and Grandy successfully pulled off a double steal. And of course the Phillies instantly decided to pitch around Yo and put him on base. Neil Walker ended up grounding out to first base for the third out. The lesson here is never take the bat out of Yo’s hands. Although who am I kidding, the Phils probably would have pitched around Yo anyway. Nobody should give Cespedes anything to hit ever.

Win When We Homer: In the top of third inning, Curtis Granderson launched a solo homer to right center field making it 2-0 Mets. In the 8th inning, Asdrubal Cabrera gave the team some insurance runs with a two run homer that made it 5-0 Mets. The Mets win when they hit home runs. It is known. And they also win when the starter pitches a complete game shutout. It’s hard to lose when that happens.

Coincidence?: Is it a coincidence that Rene Rivera was catching and deGrom pitched a complete game shutout? Nope. Rene calls a hell of a game and is a fantastic pitch framer. This isn’t a knock on Travis d’Arnaud or a call to give Rivera more starts. But Rivera does deserve to be recognized for his receiving skills.

Can’t Ask For More: James Loney had two more hits in this game. His average is up to .284. He’s been an amazing fill-in for cracked back Duda. Lucas Duda is supposedly going to resume baseball activities soon. Obviously Duda starts at first base when he returns, but it’ll be nice to have Loney on the bench for defensive purposes.

Murphslayer Update: The Nationals were losing 1-0 to the Pirates in the 9th inning with two outs this afternoon. Daniel Murphy has missed the last few games with hamstring soreness. He came in to pinch hit and hit a game-tying solo blast. He just can’t stop killing us. He’s having an MVP season. Nuts.

Tomorrow: The three game set against the Cubs in Chicago starts tomorrow. We face Jon Lester and Jake Arrieta in this series. I still can’t believe we swept the Cubs at Citi Field. This series at Wrigley is going to be tough. Thank God for deGrom. We needed this series win against the Phillies real bad. Let’s keep it up.

One thought on “Thank deGod for deGrom”