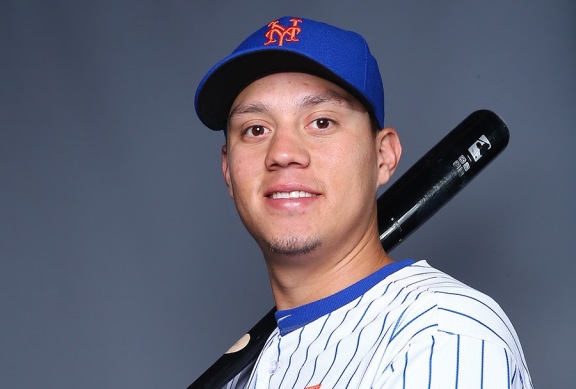 The Mets just inexplicably went from watching the season spiral out of control to sweeping the best team in the National League. That’s the most baseball thing I’ve ever heard. The season is so freaking long and ridiculous.

The Mets Hit Lefties Now?: The Mets were getting shut down by left-handed pitchers all season. Before the game, the Mets had a .693 OPS against lefties which ranked 26th in baseball. But now we can beat Jon Lester? Somehow we chased Jon Lester out of the game in 1.1 innings. We scored 8 runs and hit 3 home runs off Lester despite him having an ERA hovering around 2 on the season. How in the world does a team go from having one of the worst offenses and being unable to hit lefties to crushing one of the best lefties in the game? I’d like to think it’s because we “have the Cubs number” or some BS, but I think it’s just the offense finally breaking out and taking out any pitcher in its path.

The Mets Hit Home Runs Again?: Yoenis Cespedes hit that moon bomb homer on Thursday. Then the Mets hit 5 bombs on Friday. Neil Walker added a jack yesterday. And then today the Mets hit 5 more home runs. The offense goes from lifeless to raining home runs on the Cubs elite pitching staff. Live by the dinger, die by the dinger. The ball is flying out yet again. Curtis Granderson hit a solo shot in the first inning to make it 1-1. Then in the second inning, the Mets chased Lester from the game. Wilmer Flores hit a solo homer to start the inning. Literally seconds before Wilmer hit the blast, I was sitting in my seat at the game ranting about how his power has dissipated this season. So I take full credit for his power resurgence today. Anyway, with one out Matt Reynolds doubled and Rene Rivera hit a two run shot to make it 4-1. Then Lester, like an idiot, walked Noah Syndergaard. Juan Lagares doubled to make it second and third with one out. Grandy, Yoenis Cespedes, Neil Walker and Wilmer Flores then hit consecutive singles to run up the score and make it 8-1. The Flores single finally drove Lester from the game. Later in the game, Wilmer Flores (5th inning) and Kelly Johnson (7th inning) added two run home runs. Rene Rivera and James Loney had RBI singles. In total the Mets had 14 runs on 22 hits. It was the highest hit total the team collected at home since 1981.

Wilmer Flores Is Amazing Now?: Wilmer Flores went 6 for 6 with 2 home runs and 4 RBIs. He tied the Mets single game hit record set by Edgardo Alfonzo in 1999 against the Astros. I was at the Kirk Nieuwenhuis 3 home run game last season. I went from a 2016 Citi Field jinx to inspiring Mets players to set franchise records. Also, Wilmer can totally feel Jose Reyes breathing down his neck. I love that Wilmer’s response to the arrival of Reyes is to step up his performance. The fact that we will soon have Wilmer Flores, Jose Reyes, Neil Walker, Asdrubal Cabrera, Kelly Johnson, and James Loney is fantastic. Hopefully with Nimmo, Grandy, Cespedes, Lagares, and eventually Michael Conforto in the outfield, our team will now just be a straight up regular rotation of major league players. It will keep all these guys fresh. We just spent the weekend watching the Cubs do it. Kris Bryant, Ben Zobrist, and Javier Baez are playing all over the place in Chicago. Willson Contreras is catching and playing outfield. Miguel Montero is catching and pitching! Honestly the rotating stable of position players is the best way to go. It should have been the Mets plan from day one, but better late than never.

Bone Spurs Don’t Matter?: Noah Syndergaard went from elbow bone spurs and getting blasted by the Nationals to straight up dominating again. I guess the cortisone shot has started to take effect. He went 7 innings, gave up 7 hits, 1 run, and struck out 8.

Mop Up Stink Off: As you would expect, Antonio Bastardo and Logan Verrett handled mop up duties against the Cubs. I think at this point they are both low men on the totem pole. Bastardo handled the 8th inning fine, but Logan Verrett gave up a homer in the 9th and threw a wild pitch that led to a second run. He still managed to close the game out though to seal the 14-3 win. Also, Logan Verrett autocorrected to “slogan Verrett” on my phone. I think his slogan for 2016 would be, “Logan Verrett: When the game gets out of hand and you need an arm.”

Hot Notes From The Game: I saw a guy at the stadium with a Tsuyoshi Shinjo #5 jersey. Then on the way home I saw another guy rocking a Shinjo jersey on the subway. I had no idea there were that many Shinjo jerseys in circulation, but what a classic. I also saw a guy with a custom #25 jersey that said Last Name “BA”. Bad ass? Big Al? I honestly couldn’t crack the case on that one. Before first pitch, I was sitting near the right field line watching Rene Rivera toss the ball around in the outfield. Rivera has such a big fat catcher’s body. I had trouble telling the difference between Rivera and Dan Warthen purely based on their frame.

Paul Newmo: I keep trying to figure out a doppelgänger for Brandon Nimmo. Is it young Paul Newman? Nimmo has gangly teeth so he’s not quite at the movie star dreamboat Newman level. But I think it’s kind of uncanny. 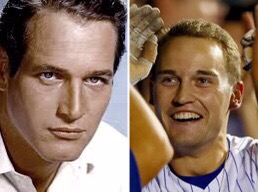 Tomorrow: The Mets now have three games against the Marlins and four against the Nationals before the All-Star Break. They really need to run off a bunch of wins and head into the break hot. Need to beat the NL East.