The Mets hit home runs again? Is this happening for real? The calendar flips from June to July, and now the Mets have seemingly rediscovered their power stroke. The Mets hit 5 home runs last night. The game may have had two rain delays, but the weather gods could not stop the Mets.

Dingers In The Rain (Act 1): The Mets power surge started in the second inning when James Loney and Asdrubal Cabrera hit back-to-back solo blasts off of Jason Hammel to make it 2-0 Mets.

Rain Delay: The tarp came out after the second inning, and I thought for sure that would be the end of the night for Jacob deGrom. He was dealing right out of the gate. Originally, I was pissed they even started the game because of the possibility that the rain could jeopardize deGrom’s outing. But the Mets brought him back out after a delay that lasted over an hour. The Cubs brought Jason Hammel back out there too. I guess I missed the memo that says it’s okay to bring starters back out after long rain delays.

The Lone Man: James Loney hit a pre-rain dinger, and once the game got started again he added a two out two RBI double in the third inning after Neil Walker singled and Yoenis Cespedes walked. He went 3 for 5 in the game with 3 RBIs. He’s hitting .297/.345/.495. Yeah I’d say the decision to take a flier on him has worked out thus far.

Dingers In The Rain Act 2: In the fourth inning, Wilmer Flores walked, Travis d’Arnaud singled, and deGrom sacrificed them over to second and third. Brandon Nimmo then launched a three run shot to make it 7-1. In the fifth inning Yoenis Cespedes added a solo dinger and Asdrubal Cabrera hit a two run blast to make it 10-1. It was his second dinger of the game. That was really all the scoring the Mets needed.

Rain Delay 2.0: Other than a solo blast he surrendered to Kris Bryant, deGrom had a great night. He went 5 innings, gave up 3 hits, 1 run and struck out 7. He got pulled after the second rain delay. Jerry Blevins, Hansel Robles and minor league call-up Seth Lugo combined to pitch four innings (1 run) to close out the game. All these rain delays brought back memories of the July 30, 2015 game against the Padres. I’ll never feel confident in the Mets chances of winning during a rain delay ever again. I’m scarred for life.

The Hot Guys: Everyone got involved for the Mets last night. Nimmo, Cabby, and Loney. Oh and Yoenis Cespedes was 2 for 4. Yo had two hits and the Mets won the game because duh. They win when Yo goes.

Asdrubal and Neil: I mentioned this earlier in the week but look how much Neil Walker and Asdrubal Cabrera disappeared in June. 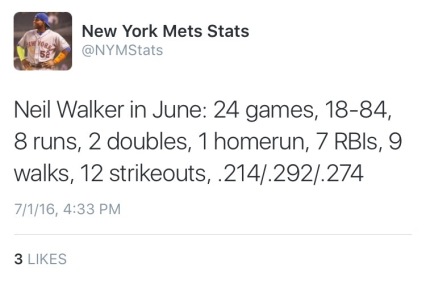 Neil and Asdrubal are going to have to pick it up big time now that the calendar has flipped to June. Last night was a good start.

Jesus Is Good Again?: Brandon Nimmo went 2 for 5 with his big 3 run shot. He also made a stellar play in the field. I also noticed he’s a big Jesus guy. He did an awful lot of pointing to the man upstairs on his big hits. I suppose that’s good. Daniel Murphy was a godly man, and I think we’ve felt his absence this year. Hopefully Nimmo can help get us back in the good graces of the Lord.

Baseball Is So Ridiculous: Every single Mets fan had their nooses ready for this weekend. The Mets season was spiraling out of control. And now here we are two days later and we’ve snagged two games from the freaking Cubs. We can’t beat the Braves. But the Cubs? No problem.

Today: Let’s see if we can beat Jake Arrieta and Jon Lester. I’ll be at the park on Sunday jinxing the hell out of the Mets. So I hope we win tonight.

One thought on “The Bombs Are Back In Town”