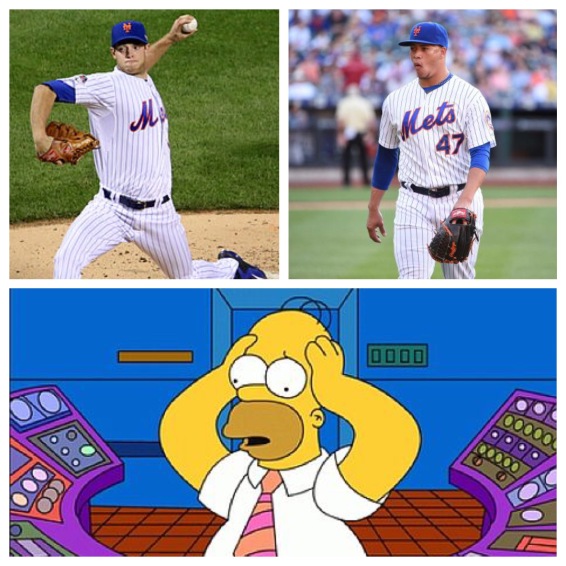 Sac Flies and Neil Walkyear: The Mets scored early in this one. Yoenis Cespedes hit a sac fly in the first inning and Curtis Granderson hit a sac fly in the second inning. Neil Walker added a two run home run in the fourth inning to make it 4-0. Walkyear has been really solid all season, but he sure is coming alive lately. He’s smashing at a .391 clip over his last 7 games. Those four runs represented all the scoring for the Mets last night. The way Matz was pitching, it felt like it would be all the scoring the Mets needed.

Matz Cruising: Steven Matz was for the most part cruising during the first five innings of this game. In the second inning, Avisail Garcia reached on an error by new first baseman James Loney. What a way to start things off J-Lone. Matz followed that error by walking Tyler Saladino, but then he struck out Dioner Navarro to squash the situation. He gave up a single in the third inning and two singles in the fourth inning, but he got key outs when he needed them in those spots and escaped. His success lasted until the 6th inning.

Matz Meltdown: In the 6th inning, Matz lost his composure and reminded us that he’s a rookie. He may be a rookie of the year candidate, but there’s still room for maturation and growth. The inning started when Jose Abreu hit a hard ground ball to James Loney at first base that ate him up. It bounced off of him, rolled into foul territory, and Abreu reached. It was called a single, but it was a play you need to make. Matz clearly lost his focus, and he followed that play by serving up a cookie to Todd Frazier who put the ball in the seats to make it 4-2. Matz has been stellar all season, and everyone makes mistake pitches. But it was clear that the Loney misplay was in his head and led to a bad pitch choice to Frazier. Matz then surrendered a single to Melky Cabrera but got Avisail Garcia to hit into a double play. However with two outs he walked Tyler Saladino, and he just didn’t hold him on base. Saladino totally embarrassed Matz by stealing second base and third base. Dioner Navarro then singled to drive Saladino in and make it 4-3. Matz failed to focus on the base runner and the batter. That was the end of the day for Matz, but those three runs and particularly that final run proved to be crucial.

Error City: As I said, James Loney was charged with one error and made one misplay that was ultimately labeled a hit. Asdrubal Cabrera made a fielding error in the seventh inning. The only reason Asdrubal’s error didn’t bite the Mets in the ass was because Thor happened to pitch the seventh inning tonight. Noah Syndergaard is striking out the planet even when he’s throwing the equivalent of an in-game bullpen session. Clean it up on defense man. We all know defense is one of our big weaknesses. I’m just going to pretend it won’t be our downfall.

Robles Meltdown: Jim Henderson and Thor got the Mets through to the 8th inning with the 4-3 lead. Jeurys Familia was unavailable last night so the Mets brought Hansel Robles in for the 8th inning, and he crumbled. He walked the leadoff man like a damn fool. Then he struck out Avisail Garcia before surrendering a two run home run to Tyler Saladino. Yeesh. With two outs he walked pinch hitter Jimmy Rollins. That was all for Hansel. But Jerry Blevins came in and walked Adam Eaton, and Logan Verrett came in gave up a single to Brett Lawrie that scored Rollins. 6-4. That was all she wrote for the Mets. After a hot start, Hansel Robles has been terrible lately. The pen was another one of our preseason weaknesses. Well after a hot start with our team ERA near the top, we are tumbling big time. Once again, I’m just going to pretend it won’t be our downfall.

Hold Men On For Christ’s Sake: Tyler Saladino ran all over Matz in the 6th inning and then Rollins did the same to Blevins. I get that those two guys have speed. But Jesus Christ can we find a way to hold guys on base? I can’t believe we’re going to have to play Rene Rivera, a guy who bats .100, in order to ensure we stop the stolen bases.

Grandyman Can Again: Curtis is heating up. He went to 2 for 4. That was a positive in this poo poo loss.

Soup’s Gone: Speaking of positives, I wrote a post on Monday saying it was time for Soup to go. And boom. Just like that, Soup was dumped to make room for James Loney. Prayers answered.

Wright Should Be DL’d: We’ve been playing with 24 guys since last Friday because the Mets are still waiting to see if Wright can avoid a DL stint for his herniated neck disk. The playing short handed consistently thing is becoming a joke. I wrote about how David Wright should be DL’d yesterday.

Ketchup or Mustard: I was at the game yesterday, but apparently Keith ordered a hot dog with ketchup on it during the broadcast. This obviously sparked the always raging ketchup vs. mustard discussion. I’m a mustard on a hot dog guy. But I really couldn’t care less if you put ketchup on your dog. Why? Because I’m a condiments man first and foremost. I’ll dip things in salsa, mayo, mustard, ketchup, ranch, Russian dressing and whatever else you want to throw my way. Ketchup never wronged me. So I have no reason to get fired up on this debate. If you want to dip you hot dog directly in a bottle of blue cheese dressing, be my guest.

Today: The Mets need to win this game and salvage a .500 road trip. Losing 4 out of 6 at home would be embarrassing for a team that fancies itself a contender.

One thought on “Matz And Robles Meltdown”