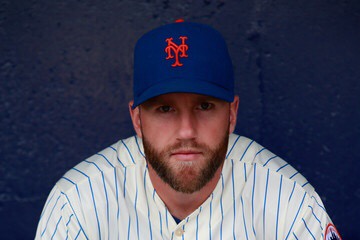 The Metssiah has been on the “dump Eric Campbell” train since day one. Not day one of the 2016 season. Not day one of 2016 Spring Training. I wanted nothing to do with Soup on day one of 2015 Spring Training. In 2015, our front office promised us that we were finally assembling a true 25 man roster. Then they went ahead and gave us John Mayberry Jr., Kirk Nieuwenhuis, and Eric Campbell. They made us wait until July 31st before a real 25 man roster of major leaguers was assembled. Fortunately for Mets fans, Sandy assembled a championship caliber roster at the deadline. But here we are again in 2016 dealing with the same lack of depth BS. Time and time again, Terry Collins has been forced to use this guy whenever we have an injury at first base or third base. Unfortunately with the health struggles of David Wright and now Lucas Duda, we’ve been getting more Soup than ever this year. Somehow in the eyes of the Mets front office, he’s the team’s 26th man. Well the time has come to cut ties with Soup. I don’t mean demote him to Vegas. I mean he needs to be released and cast out of the organization. Eric Campbell is batting .159 on the 2016 season. He hit .197 in 173 ABs last season. He’s a .221/.311/.624 lifetime hitter. He’s absolute crap, and there’s no place for him in New York.

Since his debut in 2014, I’ve been forced to listen to all the Soup apologists. I’ve read article after article talking about his walk rates, the exit velocity when he makes contact, the number of pitches he sees per AB, his versatility in the field, and all the absurd Soupermetrics. Well enough is enough. He’s useless and brings nothing to the table whatsoever. What’s that? He plays third base and first base and we need depth at those positions? Well the Mets should have handled that problem before the season. Instead they handed the backup keys to this bum again in 2016. It’s the Mets fault. I don’t blame Soup for being put in these positions. He doesn’t belong here. He’s facing competition that he has no chance of succeeding against. I don’t know if he will ever be a competent major leaguer, but the time has come for him to explore that path elsewhere.

I’ve lived through this situation many times before with the Mets. When the Mets employ a player who’s a good person and tries hard but wears out his welcome. My personal favorite examples are Roger Cedeno from 2003 and Luis Castillo from 2010. Cedeno had prior success with the Mets, we paid him some money, and by 2002/2003 he completely lost his ability to steal bases and make contact which were the reasons we paid him to begin with. Luis Castillo had a similar story. By the time he joined the Mets he lost his speed, his contact bat, and his range in the field. The fans chose to scapegoat these two players for the team’s woes and booed them out of town. The differences with Soup are 1) Soup was never good like Castillo/Cedeno 2) This team is actually good, so we can’t afford to have weak links. Sure it’s not entirely fair to pin every little offensive problem the team has on Soup, but the reality is we’d be better off playing someone different out there. It literally can’t get worse than a guy hitting .150. It just can’t.

So goodbye Soup. Get the hell off my team. Get the hell out of my organization. For now, James Loney plays first base and Wilmer Flores plays third base until Duda and Wright can come back. Sandy must go out and get a real backup 1B/3B. But in the meantime, play anyone else out there. Because I’m done with Soup. And so is the rest of the fan base.

One thought on “It’s Time For Eric Campbell To Go”