Here’s the short recap: Jacob deGrom pitched a great game, the Mets hit some dingers, Jeurys Familia came in to pitch in a 5-1 non-save situation and blew the game. Then Curtis Granderson saved the day by hitting a walk-off solo blast in the bottom of the 9th. It was one hell of a ballgame.

DeGrom Velocity Reunion Night: Let’s start with deGrom’s night. Jacob has been good all season long, but he hasn’t been dominant. In 2016, his velocity has been down and his command has been slightly off. That being said, unlike Matt Harvey, Jacob has had strong results all season. Last night he finally took a huge step towards a return to dominance. He gave up a sac fly in the third inning and wiggled out of trouble in the 4th and 5th inning. But he was hitting 96 MPH consistently on the fastball and averaged 94 MPH. His command was good, and his secondary stuff was working. He went 7 innings, surrendered 3 hits, one run, and struck out 7. His 3 walks were slightly out of character, but still this game was an extremely promising sign for the direction his season is going. What if deGrom completely returns to form? DeGrom, Steven Matz, and Noah Syndergaard? Daaaammmnn.

Juanny Beisbol: The Mets got off to a nice start on offense. Asdrubal Cabrera had a one out single in the first. Then with two outs, Yoenis Cespedes walked. Then Neil Walker doubled in a run and Juan Lagares doubled in two more. 3-0 before you could blink. Juan came through big time all game with 3 RBIs.

Blasty McBlastersons: The rest of the offense was the Mets typical blast show. Solo bomb from David Wright (4-1) and from Juan Lagares (5-1).

Oh No Familia: As I mentioned, Terry brought in Jeurys Familia in a non-save situation. He had all the velocity you could ask for on his fastball last night (97-98 MPH). But he ultimately just got rocked. A couple of soft singles to Adrian Gonzalez and Howie Kendrick. Then with one out Yasiel Puig singled and Familia walked in a run to make it 5-2 when he walked Yasmani Grandal. Familia then struck out Trayce Thompson for the second out. But in true scripted fashion, Chase Utley came up with bases juiced and roped a double to score 3 runs and tie the game 5-5. Familia got the third out to keep the game tied. But he got rocked last night. Terry took a lot of heat postgame for bringing in Familia in a non-save situation. Terry said F-U to everyone. Bringing in closers in non-save situations can be a thing. Sometimes guys don’t have the same focus, and it messes with their results. My problem with that theory for Familia is he’s always focused and always elite. I think last night he just got rocked. Bad nights happen. My real beef is the same one I always have with Terry. I’m worried about overuse. If you bring him in for saves, non-saves, rainouts, special occasions, birthday parties and everything else, at some point he’s going to fall apart. Only Mariano Rivera had the superpower to pitch forever. Everyone else has limits.

Grandyman Saves The Day: Familia’s bad night was immediately nullified by a leadoff walk-off solo blast to right field off Grandy’s bat in the 9th inning. After striking out 3 times in this game he saved the day. He’s been at the damn Mendoza line all season with that .200 average, but he still comes up so big. We need the Grandyman. He’s part of the winning formula.

Rook: 19 year old rookie starter for the Dodgers Julio Urias pitched bleh. He was basically yanked right away, but he’ll have a great career. Frankly I was surprised he didn’t shut the Mets down because rookies always shut us down. Maybe the problem was he was a notable rookie. Usually it’s the obscure rookies that show up and pitch complete game shutouts.

Happy Birthday Terry: Yesterday was Terry’s B-Day. Happy 67th birthday to Terry Collins. He’s the oldest man in a Mets uniform and the only one that doesn’t consistently get back spasms. Speaking of Collins, he was in rare form pregame. On the first base question, he officially poo pooed the idea of moving someone to first base. He said “This isn’t junior high school where you put the fat kid over at first.” That’s an early leader for Cantankerous Old Terry quote of the year. 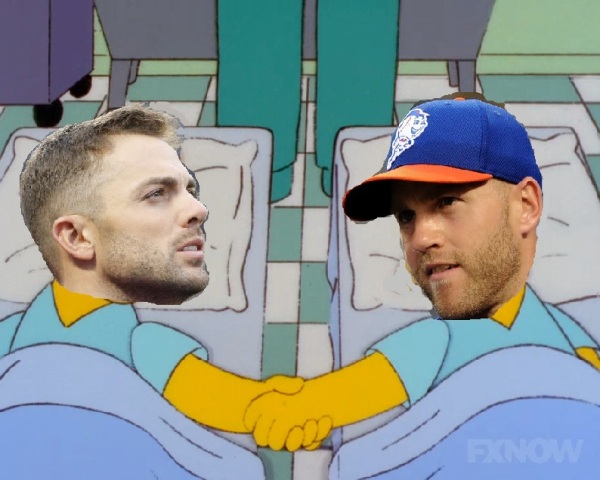 Secret Back Transplant: David Wright hit a solo blast last night. He has homered in his last 3 games. You may think it’s a random resurgence, but my sources tell me last week Eric Campbell finally agreed to take part in a controversial back transplant performed by head trainer Ray Ramirez at the Hospital For Special Surgery. Soup agreed to give up his strong young back to David to lengthen Wright’s career. Bless Soup. He finally came through as the hero we needed.

Find Yourself: Wilmer Flores is staying in the minor leagues until the end of the weekend to find his swing and his glove at first base. The guys on a freaking scavenger hunt. And on the first base front, Terry Collins squashed the Michael Conforto to first base talk (which he originally started). “Right now Michael has a lot on his plate and I don’t need to add more to it.” Thank you Terry. Thank you for using your brain.