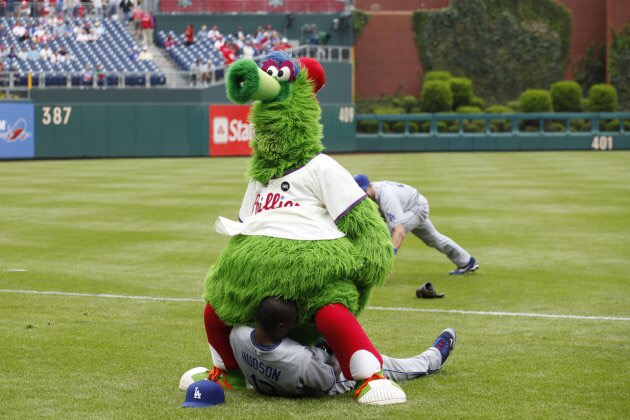 Thank the old gods and the new for the NL Least. So far the Phillies are 0-3, the Braves are 0-2, and the Marlins are 1-2. The Phillies just got swept by the actively tanking Reds. What a joke. The weakness of our divisional foes is arguably the biggest advantage we have over the other NL teams. We need to beat up on Philly, Atlanta, and Miami. We did it last year. We were 47-29 against the NL East last season. And we went a mere .500 against the rest of the league. Obviously the Nats are in our division too, and we’ll still need to beat them when the time comes. But a home three game set against the cellar dwelling Phillies needs to be a slam dunk series victory and preferably a sweep all season long.

Jacob deGrom is scheduled to pitch the home opener on Friday at 1pm. However, his wife is due to have their first child any day now. If she gives birth tonight or tomorrow, it’ll probably mean Bartolo starts the home opener with Steven Matz going Saturday and Harvey on Sunday. But assuming his wife doesn’t give birth on Friday, these are the tentative matchups:

Game 1: Jacob deGrom vs. Jerad Eickhoff. Eickhoff was good last year in his 8 rookie starts. He faced the Mets three times and hurled three quality starts. His last appearance on October 1st, he pitched 7 shutout innings against the Mets with 10 strikeouts. But that’s a fairly small sample size. DeGrom had two great starts against the Phillies at Citi last year. But his worst start of 2015 was in Philadelphia when he only lasted 2.2 innings and gave up a bunch of runs. But we are in NYC this weekend. So he should be fine. Right? Michael Conforto and Curtis Granderson both hit home runs off of Eickhoff last season and Conforto actually went 4 for 8 overall.

Game 2: Bartolo Colon vs. Vincent Velasquez. Velasquez is a 23 year old pitcher the Phillies acquired in the offseason trade of their former closer Ken Giles. He made 7 starts last season and a bunch of relief appearances. He’s never faced the Mets. He throws a low to mid 90s fastball, change-up and curve. Hopefully old dog Tolo teaches this new dog a couple tricks. Bartolo went 4-1 against Philly in 2015.

Game 3: Matt Harvey vs. Jeremy Hellickson. Hellickson came over from Arizona and was originally a Tampa Bay Ray. He’s always been back end of the rotation filler. He gives you a chance to win and eats innings. Perfect rotation placeholder for Philly while they rebuild. He pitched really well in his 2016 debut against the stinky Reds going 6 innings and only giving up a run. But Philly found a way to stink more and their pen blew it. Yoenis Cespedes is 2 for 6 against him, Neil Walker is 2 for 5, and Asdrubal Cabrera is 2 for 8. Granderson and Alejandro De Aza have faced him the most going 3 for 17 and 4 for 15 respectively. We should really beat down on him. Harvey went 2-1 with 3 quality starts against Philly last year. The loss came in May back when we didn’t score runs ever.

Citi Field Collapsing: We are back home for the first time since our run to the World Series. The stadium is going to be bananas over the weekend. Get there early so you don’t have to wait on line behind a bunch of morons who don’t know how to scan their print at home tickets.

Yo Dingers: Cespedes was a road hitting warrior last year for the Mets. But he also feasts on mediocre pitching. It’s how he makes his living. Hell it’s how most hitters make their living. I’m hoping he crushes Hellickson on Sunday and these young dudes on Friday and Saturday while also taking advantage of any opportunity he gets to expose the Philly pen.

Tobacco Ban: With the NYC stadium smokeless tobacco ban officially in effect, Harvey can’t dip and Yo can’t crush cigarettes anymore. Keep your eye on the Mets dugout this weekend to see if they’re ripping vape pens in there like a couple of degenerates.

Somos Familia: Jeurys Familia has new custom walk up music. He dumped my jam Danza Kuduro. I’m sad that I won’t hear Danza Kuduro at Mets games anymore, but I will have to settle for hearing it 10 times a week on Spotify during my commute. But trust me, this new Bachata song called Somos Familia es fuego. Hopefully we hear it three times this weekend.