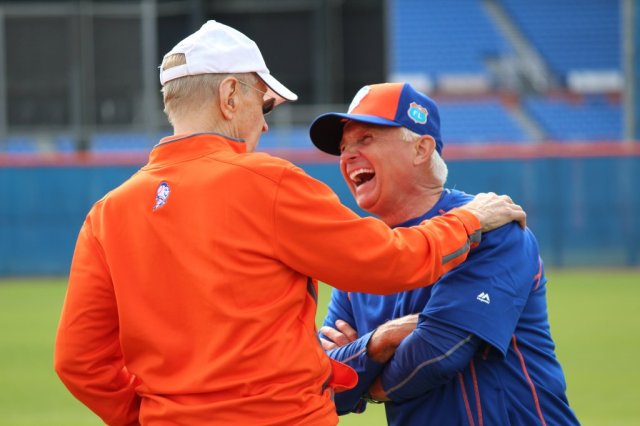 Spring Training started this week, and almost every Mets player arrived early giving fans a clear indication of how dedicated the entire team is to the goal of winning the 2016 World Series. Bartolo Colon was looking as sexy as ever during fielding drills. Michael Conforto talked about how much he wants to improve in his sophomore season. And Yoenis Cespedes showed up early to camp on Sunday to hopefully silence the lying critics who consistently question his character and motivation. Even Terry Collins’ old man base tan was in full effect. In the photo above taken by Mets beat reporter Anthony DiComo, Terry had a nice laugh when Fred offered to manage his 401k.

That’s right, other than Matt Harvey and Lucas Duda talking about some of their World Series Game 5 regrets, it was all smiles in Mets land this week. Quite frankly, it has been mainly smiles for the last six months, and the unprecedented streak of happiness has me waiting for the other shoe to drop. But until that happens, let the good times roll.

Chase Utley and his Apology Fruit Basket: This week Ruben Tejada, victim of the vicious Chase Utley NLDS takeout slide, said that Chase still hasn’t reached out to him directly to apologize for his disgusting “hard-nosed baseball play”. Ruben indicated in the New York Post that he’s still not over the play, and he wants MLB to implement changes to better protect middle infielders. But he did mention that Chase “sent me a couple of things”. Utley is such a jerk. Intentionally crush an infielder and then send him a goddamn edible arrangement like he’s Derek Jeter compensating a woman after a one night stand. I cannot wait for Noah Syndergaard to be on the mound this season and face Chase. Show him what we think of his damn fruit basket apology.

Sports Illustrated Says Mejia Cost Himself 47 Million: Tom Verducci of Sports Illustrated said this week that as a result of his lifetime banishment, Jenrry Mejia may have cost himself close to 47 million dollars in potential future earnings. He based this on the fact that Mejia lost $2.595 million salary in 2015, $2.47 million salary for 2016, a possible $9 million over his 2017 and 2018 arbitration-eligible seasons and a potential free agent contract close to $31 million in 2019. I completely agree that Mejia is an absolute moron for not simply trying to pitch clean and collecting whatever money he could through the arbitration process. That being said, in today’s MLB it’s tough to entertain the possibility of a player collecting millions over a long career when he spends his offseason loading up on horse testosterone. That’s more of a 90s MLB pipe dream. It certainly doesn’t matter anymore since Mejia won’t make a cent playing on the Field of Dreams with Pete Rose, Shoeless Joe Jackson and the rest of MLB’s all banned team.

Collins Says Lagares is Hot: Terry Collins raved about Juan Lagares and his offseason conditioning this week as he arrived at camp in “unbelievable shape”. I’m a little disappointed Juan didn’t recommend his trainer to Mejia, but I am certainly ecstatic to hear that Juan came to camp in the best shape of his life. Although I can’t imagine all those arm curls having a positive effect on his already torn UCL. Either way Terry couldn’t get enough of Juan’s “sweet sweet ass”.

Wright is Deteriorating: I honestly can’t bear to listen to another interview with David Wright. The reporters all asked him this week about how many games he hopes to play and how his back is feeling. And according to Mike Puma, he said he has “good and bad days physically but the vast majority are somewhere in between”. It’s never good when your franchise player is describing his physical condition in the same way as your 88 year old Grandmother #PrayforDavid.

Jon Niese is The Mayor of Bittersville USA: When Jon Niese was originally traded to the Pittsburgh Pirates for Neil Walker in December, he took a parting shot at the Mets basically saying he wouldn’t miss their lousy defense. At the time I remember giving him a pass because he was a lifelong Met, the trade probably caught him off guard, and also our defense was miserable. But this week Niese arrived at Pirates camp and complained about the Mets even more. This time he was whining about how the Mets handled their starting pitchers in 2015. You know the same starting staff that had the 4th best ERA in the league in 2015. Niese gushed about how excited he is to get away from the potential six man rotation the Mets used at times last season. He also blamed all his poor pitching in the second half of 2015 on the fact that he pitched on July 24th rather than leave the team to be with his wife who was in labor. He gave up 6 runs over three innings in that game and had a 5.46 ERA across 11 starts and four relief appearances after that start.

I think at this point it’s clear Jon Niese has handled his trade to the Pirates about as well as he handled any in game adversity during his entire Mets career. One bad call by the umpire, one bloop single, one unexpected trade and Niese has a complete and utter meltdown. The wheels fell off for him every damn time he was tested. His post trade cry baby act is a joke. Especially considering he witnessed how poorly we treated Dillon Gee. Gee was our opening day starter in 2014. And as soon as our young starters emerged last season, we sent him to AAA Vegas for a little unwanted casino seasoning. Gee was rightfully upset, but he sucked it up and played out the season in Vegas. Now Gee has moved on with his career as he tries to win a rotation spot in Kansas City. Instead of doing that to Niese, we traded him to a geographically close, 98 win team, that actually wanted him. Boo-hoo Jon. I’m so sorry you have a chance to compete for a championship with a new team loaded with talent. Jon needs to grab a tissue, dry his tears, and move on with his life before his act gets any more pathetic.

What If We Never Get Back?: This week, Curtis Granderson reminisced with reporters about his experience with the 2006 AL Champion Detroit Tigers. He stated that the 2006 Detroit team is as an example of how there are no guarantees that a team will return to the World Series after an appearance the prior season. Grandy said, “We had a lot of young arms, a lot of position players mixed in with some veteran guys, some All-Star guys and we figured we’d get back there the next year.” That Tigers team never made it back to the World Series, and they didn’t even make it back to the playoffs until 2011. It goes without saying that making it to the World Series in consecutive seasons is very rare. I’m happy Curtis, as a veteran player, is telling all the young guys to forget about last season and focus on putting in the work needed to be successful yet again in 2016. But I sure as hell can’t forget last season. And I don’t know if I will be able to handle anything other than another deep playoff run. Losing in the NLCS in 2006 was devastating, especially knowing the Mets probably would have beat the hell out of Curtis’ Tigers in the World Series like the Cardinals did. But it was the collapsing in 2007 and 2008 that sent us spiraling back into the doldrums as a fan base. I just hope that this 2016 team has the talent and fortitude to get back to the World Series and take care of unfinished business, so we never have to go through that post 2006 emotional letdown ever again.