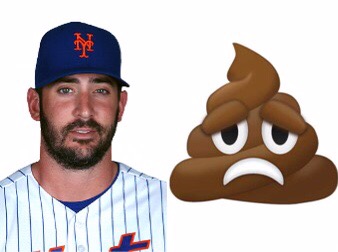 Matt Harvey pitched like crap. The Mets never really had a shot last night. I don’t know if Harvey is struggling because he’s still recovering from the thoracic outlet surgery or if he’s just dunzo but he hasn’t looked like dominant Harvey in years. He gave up 5 runs, 3 home runs, and 5 walks last night over 5 innings. 5.63 ERA? Good lord. Lately with this rotation I feel like it’s a throw back to 2010/11 when the Mets were starting mooks like Pat Misch.

Long Bomb: Neil Walker had three hits and smoked a long solo blast to right field in the 4th inning.

How Long Before Terry Blows It?: Lucas Duda came off the DL yesterday and Terry Collins actually made the right call by keeping T.J. Rivera in the lineup. T.J. had one hit last night. How long before Terry banishes him to the bench again and plays Jose Reyes? It’s going to happen right? No way Terry makes the right lineup decision. The bigger question is around Michael Conforto when (if) Yoenis Cespedes returns. Obviously the answer is Conforto plays center field everyday, and there’s no discussion. Grandy goes right to the bench. But I still feel Terry will find a way to screw that up.

Today: Robert Gsellman and his 6.54 ERA takes the mound. Last time I checked the Mets had the 28th ranked team ERA and their starting pitcher ERA was 5.00 ranked 29th. Expect another blowout today.

To summarize this crappy loss, the Mets offense was non-existent (again), the bullpen looked like crap (again), the defense was horrendous (again) and the starting pitching was thoroughly disappointing. It was a total stinker in every single way.

No Offense: The pathetic Mets lineup managed to get three hits. The first hit was a Lucas Duda solo homer in the bottom of the 5th inning. That homer represented the only run. The rest of the game was filled with Mets striking out (13 times). Over the first five innings the Mets made Adam Conley look like Tom Glavine in his prime. Then the Marlins pen combined to pitch four innings, giving up two hits and striking out sevem. Yoenis Cespedes and Wilmer Flores both went 0 for 3 and struck out twice. Neil Walker struck out four times. Jose Reyes didn’t start this game, but even he managed to sneak in a quick K in his pinch hitting appearance.

Shake Things Up: It’s cold and early in the season. It’s not time to make sweeping judgements about how this offense will perform over the course of the year. But the reality is we already saw this lineup last year, and we know that it’s feast or famine. In the short term, Terry needs to get Michael Conforto into the lineup and possibly T.J. Rivera. Let’s shake things up for a few days.

Rough Start: Robert Gsellman left balls up in the zone and the Marlins hit everything hard. In the first inning Gsellman gave up a one out double to Miguel Rojas and then with two outs Giancarlo Stanton singled to bring the first run home. In the second inning he gave up a moon shot homer to Marcell Ozuna. In the third inning J.T. Realmuto hit a “triple” (see horrendous defense section below) and Miguel Rojas drove him in on a sac fly. Gsellman also ran into major trouble in the 5th inning, but Terry stuck with him and he was able to strike out Marcell Ozuna with runners on second and third and two outs. It may have been a poor start, but it was nice to see him finish strong and keep the team in the game.

Horrendous Defense: In the third inning, J.T. Realmuto hit a ball to center field and Curtis Granderson straight up misplayed it. It should have been an out and instead it was a triple. It’s a reminder that Curtis does not belong in center field at 36 years old. The Grandyman also made an excellent catch in center field to end the 6th inning, but in reality he was just playing too deep and was able to make the catch at the last second. After the diving catch I saw the look on his face and it said “I can’t do this for 162.”

In the 4th inning, Wilmer Flores butchered a ground ball to third base for an error.

The other obvious defensive liability worth noting is Jay Bruce. I feel like he had a ball hit to him in every inning of the game and every time it happened I was holding my breath. He really stinks out there.

Bullpen Rocked: Josh Smoker pitched a strong sixth inning and Jerry Blevins retired a couple of batters but Hansel Robles, Paul Sewald, and Rafael Montero looked tired and awful. Hansel Robles walked two batters in the 7th inning and gave up a run. Once it was 4-1 I felt like Terry was waving the white flag when he brought in newly called up Paul Sewald to pitch the 8th inning. But after Paul gave up two runs, Terry seemingly abandoned the plan and decided to use the same overtaxed relievers yet again. Blevins came in and then he turned to Rafael “Dead Arm” Montero and even Fernando Salas pitched in a freaking blowout. Terry stinks.

Dead Wrist: Asdrubal Cabrera was flexing his wrist after his first and second at-bat. He stayed in the game, but I’m sure he’ll need a season ending wristectomy.

Schedule BS: The Mets have 32 consecutive games against the NL East to start the season?!? Is MLB serious? Why the hell would they cram all of the divisional games in April and May? The scheduling people suck. Well I guess the entire season is on the line in April. No pressure.

Today: Hopefully Noah Syndergaard can help us salvage one game at home against the Marlins. Talk about a pathetic start to the season. If Noah’s blister comes into play tonight Panic City will be in flames six games into the season. Also, blister rhymes with Fister. So we should probably sign Doug Fister. 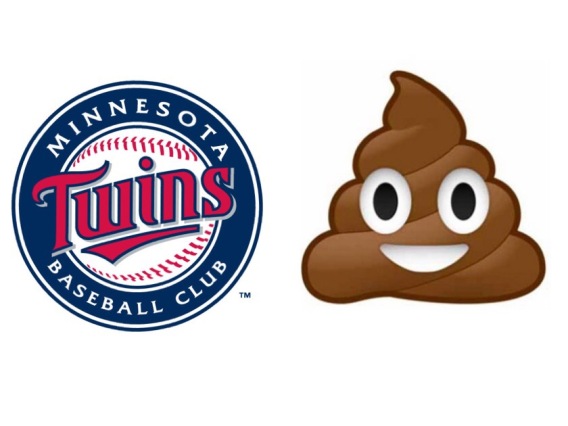 The Minnesota Twins are so horrible that they don’t deserve two full recap blog posts. The Mets swept their doodie squad right out of town. Two wins, one blog. They actually weren’t the easiest wins. We didn’t really dominate in each game. But considering there was a stretch of the season where it felt like we’d never win two games in a row again, I’m still proud that we took care of business against baseball’s worst club.

Yo Obviously: The Twins took an early lead on a fourth inning solo homer. But Yoenis Cespedes managed to temporarily save the day in the 8th inning with a game tying RBI single.

Grandyman Heroics: In the 11th inning, Hansel Robles let up a solo shot to Byron Buxton to give the Twins a 2-1 lead. Curtis Granderson managed to keep the Mets alive with a game saving opposite field solo shot in the bottom of the 11th. But Jose Reyes struck out with the bases loaded in that same inning which kept the game going. In the 12th inning, Grandy hit the big time walkoff solo shot. His low batting average and terrible numbers with runners in scoring position this season really made everyone forget how big of a contributor he’s been during his time with the Mets. But Grandy is slowly creeping towards the 30 homer mark and helping to boost the Mets playoff chances. He’s also boosting his offseason trade value if the Mets decide to go in that direction.

Need A Zillion Arms: Seth Lugo pitched 5 innings and gave up 1 run. Then 7 relievers combined to pitch 7 innings. Other than the solo shot surrendered by Robles the pen shut down the Twins. These new young starters may not dominate in the same way as Jacob deGrom or Matt Harvey but they keep the Mets in games.

Magic Healing: On Sunday the Mets started Lucas Duda at first base despite saying that he would be limited to pinch hitting duty upon his arrival. I love that the Mets activated Duda and expect us to buy the Lucas magically healed narrative. They love playing guys with injuries. It’s their favorite thing in the world. Pray for cracked back Duda.

He Gave Them A Reason: I wrote last week that I had no problem with the Mets starting Jay Bruce instead of Michael Conforto because Michael has essentially done nothing on the field to warrant playing time and Bruce is an established major league slugger. I said if Conforto wanted to play he should compel the Mets with his bat. On Sunday he drew the start along with the rest of the B-squad starters and he had two hits. He had a 2-RBI single in the first inning. You know what? Now if Terry wants to play him at least we can say he had a multi-hit game. At least now we can actually say Conforto is hitting and Bruce is not. Before Sunday, Mikey had 2 hits in September. Hard to make an argument when both guys hadn’t hit a lick all month.

Quick Hook: Gabriel Ynoa delivered a performance similar to that of Lugo on Saturday. He went 4.2 innings and gave up a run. Terry yanked him after he gave up a two out single in the 5th inning. I probably would have let him stay in, but Terry knows he has a bunch of arms in the pen and obviously wanted to lock up that sweep. I’m fine with the quick hook.

Please Be A Surprise Stud: T.J. Rivera had 3 hits on Saturday and 2 hits on Sunday. He hit a solo homer in the third inning that gave the Mets a 3-1 lead. His homer was the difference in the game. I wrote earlier this year that it would be amazing if the Mets had a random breakout candidate that turned out to be a major league stud. I hope Rivera is one of these late blooming surprise stories. I’m starting to think the Mets feel he might be a bigger contributor than they originally anticipated. I’m also still trying to rationalize the trade of Dilson Herrera. So yeah that’s where I’ve landed. I’m hoping they thought Herrera was expendable because Rivera will be great. It’s more likely they dumped Herrera because they are stupid and panicked at the deadline.

Yo Dizzy: Yoenis Cespedes left the game in the 7th inning with dizziness and nausea. I’m guessing the fumes emanating from the stinky Twins finally knocked him out.

Terry Killed Wilmer: Wilmer Flores still can’t swing a bat. His wrist is screwed up. Terry and Tim Teufel destroyed him in that home plate collision game. That was a such a goddamn blunder.

Pray For Matz: The Mets are saying Steven Matz might be available to pitch this week. They’re going to kill him aren’t they? Please don’t hurt him Mets.

Terry Totally Needs 40 Guys: I love how much better this team is now that we don’t play short-handed every single night. Terry crushes managing with a 40 man roster. Hopefully they change the rules so Terry and Co. can play like this for 6 months instead of 2.

Today: Noah Syndergaard takes the mound against the Braves today. Let’s go 10-3 and win 90 games! 90? Forget 90 let’s win out. No excuses. These teams all stink.