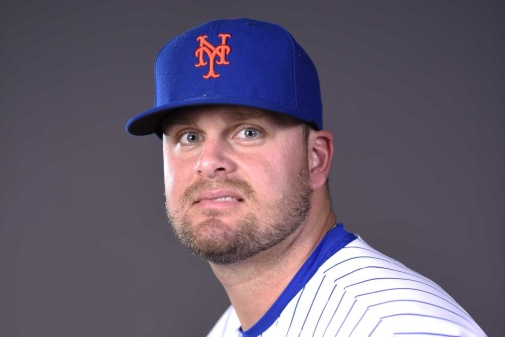 Apparently Duda has been dealing with soreness in his back and hips. Had an injection recently that will require rest for a couple of days.

The most shocking news in the history of professional sports just broke. A player with an injury that was never operated on and never healed apparently still has the same injury.

I’m so confused. Lucas Duda is still injured? His cracked back is still slightly cracked? Why didn’t the back problem just magically go away over the offseason?

Duda arrived at camp, took a few swings and grounders, and now he’s back (get the pun?) to getting painkilling injections all over the place. Pooooor Lucas.

You know the deal. Pray for Lucas. Don’t you worry. The Metssiah will be doubling his pray effort for Duda. I host a special vigil in my living room for Mets players with cracked backs literally every weekend.

The real person we need to pray for is Terry Collins. Duda will be on his third back injection a week before Opening Day and only then will Terry consider trying Jay Bruce or Michael Conforto at first base. Pray that Terry wakes up and finds a way to utilize his players (namely Conforto) in the most effective way possible. Otherwise #TeamCrackedBack (i.e. David Wright, Lucas Duda, Neil Walker) will all be out on Opening Day and Terry will have T.J. Rivera at second base and Wilmer Flores at first base and still find a way to have Conforto rotting away in the Vegas sun.

Wow the Mets finally won a close game against the Kansas City Royals that came down to the performance of our bullpen! Lolz.

Bartolo Thumb-backer: Bartolo Colon threw four pitches and was instantly injured by a comebacker that ricocheted off of the thumb on his pitching hand. Unbelievable. X-Rays were supposedly negative. Hopefully that extra layer of hand fat helped protect the bones/muscles from any actual injury.

Mets Pen Beats Royals Pen: Hansel Robles/Erik Goeddel/Jerry Blevins/Addison Reed/Jeurys Familia combined for 8.2 innings and only surrendered one run. Impressive effort from this unit. Robles threw 65 pitches over 3.2 innings. He threw like 40 pitches a couple days ago. I smell another reliever corpse. Speaking of dead relievers, Jim Henderson went on the DL. Terry killed him. RIP.

Dingers Only: In the bottom of the first inning, Asdrubal Cabrera hit a solo home run and in the bottom of the fourth inning Yoenis Cespedes hit a solo dinger to center field. That was the only offense for the Mets. Dingers only per usual. The Mets had six hits and only three opportunities with runners in scoring position tonight. Obviously they failed to take advantage of any of those chances, but they still won. I’ll take it. We stole this game. Also, check out how pathetic we are with runners in scoring position (prior to this game):

Last place. As bad as it gets.

Plawecki Out, D’Arnaud In: Travis d’Arnaud made his return to the lineup tonight after his lengthy DL stint. Mr. Glass picked up right where he left off going 0 for 3 bringing his average to .184. Welcome back. Kevin Plawecki rightfully got demoted to Vegas after his horrendous stint filling in. Hopefully he puts things together and has an impact later this season.

Wheeler Setback: Zack Wheeler is on his way back to New York to have his elbow examined by team doctors after experiencing discomfort. It’s a setback. The Mets love setbacks. Setbacks are the key to ensuring injuries continue forever. Wheeler and Colon go down on the same day. Yeesh. Pray for Zack.

Tomorrow: The Mets have a day game with Noah Syndergaard on the mound tomorrow. Please sweep this two game set. We need wins so bad.