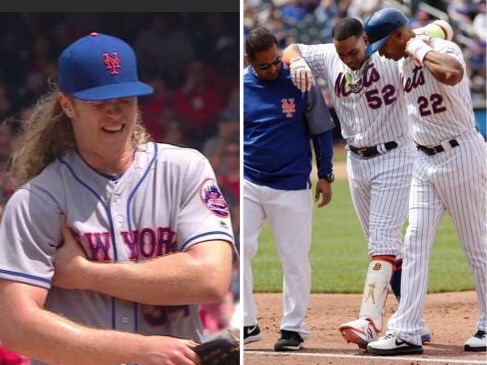 In 15 years Noah Syndergaard will be pitching for the Texas Rangers against the New York Yankees in a September game in what will be his last season as a major league pitcher. He won’t throw 100 MPH anymore, but he’ll still be able to take it up to 92-94 MPH in those high pressure spots when the adrenaline is pumping. He’ll be finishing up an impressive and long career that included pitching for four different teams and many experts will see him as a hall of famer.

Matt Harvey will already be retired and working in the broadcast booth for the YES Network. He’ll be handling coverage of the game featuring his former teammate. Harvey will be one of those broadcasters that occasionally wears his championship rings in the booth. The two World Series championships, and the Cy Young he won in Yankee pinstripes are the clear highlights in what turned out to be a distinguished career.

They both occasionally chat with Steven Matz who retired two years earlier after a successful career as both a starting pitcher and a dominant late inning reliever. Matz still receives questions from fans about whether he preferred starting or relieving. In his heart he knows he loved being a starter, but it wasn’t until he left the Mets and re-invented himself as a reliever that his career really took off.

Jacob deGrom is retired living in Florida with his family. In the last season of his career he decided to try and return to Flushing to finish things where it all started. He was already considered one of the greatest pitchers in Mets history, but he felt like closing things out in Queens made sense. Unfortunately the Wilpons wouldn’t take any phone calls from his agent. They had no interest in giving him the 8 million dollar one year deal that he wanted to make the Mets reunion happen.

Once a year the four pitchers get together for dinner in New York to reminisce about their years in Queens. It’s always bittersweet since the conversation revolves around early career injuries, mistakes made in the 2015 World Series, and how frustrating it is that they never made it back as a group despite all the pitching talent. Generally the pitchers avoid bad mouthing an organization that many feel mishandled their injuries time and time again. The guys are just too classy and proud to make excuses and play the blame game.

The Sad Reality: That narrative above is where we are heading folks. As long as the Wilpons continue to be the final decision makers for this franchise we are destined to continue seeing regular incompetence in every area of this franchise. On Sunday the Mets lost one of the most embarrassing games I have ever witnessed. The 23-5 loss erased any good feelings from the weekend series win in Washington. Noah Syndergaard left the game with a lat injury that I’m sure was a result of him changing his mechanics to try and compensate for another injury that we don’t know about yet. We all saw it coming the second our front office allowed him to refuse an MRI. Refusing treatment from medical professionals is not typically an option that sports organizations give a 23 year old unless that organization is the incompetent New York Mets franchise.

This all falls at the feet of ownership. If you really feel more comfortable blaming Wilpon stooge Sandy Alderson then go right ahead. The bottom line is the mishandling of injuries and re-occurring organizational incompetence is the fault of Fred and Jeff. I still feel like this organization will never escape the cycle of embarrassment until the Wilpons are out of the picture.

Today: We head to Atlanta to play the Braves. As all Mets fans know, whenever the team heads to Atlanta good things happen. I’m sure this four game set will totally lift our spirits.