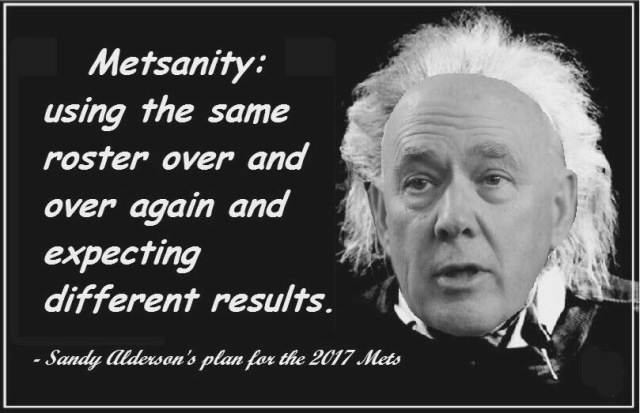 As last night’s game entered the bottom of the 10th inning I was reminded that almost nothing has changed with this team since last season. The Mets still have the exact same feast or famine home run dependent offense. Michael Conforto gave the Mets their first run last night with an opposite field solo blast in the first inning. Curtis Granderson tied the game at 3 in the 6th inning with a solo bomb to right field.

Other than an RBI single in the fourth inning by Grandy, the Mets consistently failed to get the key hit with men on base. Juan Lagares failed to get a hit with two men on and two outs in the 5th inning. In the 7th inning Zack Wheeler hit a two out pinch hit double and the Nationals ended up loading the bases. Then Oliver Perez came in and got Jay Bruce to line out to right field. The Mets had two men on with one out in the bottom of the 9th inning and Conforto/Lagares failed to knock in the game winning run.

By the time the 10th inning rolled around, I knew I was essentially crossing my fingers and hoping that Jay Bruce, Neil Walker, or Curtis Granderson would sock a game winning homer. And that’s basically what they all tried to do. Jay Bruce came the closest to giving the Mets the win with a deep flyout that died in front of the right field fence.

It’s really going to be tough to watch this home run dependent roster compete day in and day out for 162 games.

The Living: Matt Harvey pitched instead of Jacob deGrom who was scratched with a stiff neck, and Harvey gave the Mets a quality start. He went 7 innings, gave up 3 runs on 4 hits (2 home runs). He didn’t have overpowering strikeout stuff, but as long as he’s giving the team innings and churning out quality starts I can’t complain. Michael Conforto continues to look incredible at the plate and in the field. He’s been making highlight reel catches in left field and center field.

The Rusty: Terry is a moron for letting Jeurys Familia throw 30 pitches against the Phillies in his first game back from suspension and then bringing him back out there last night in a big spot. Terry called on him with two men on and one out in the 11th, and he had absolutely nothing. He walked the bases loaded and then walked in the winning run.

The Dead: Lucas Duda went on the DL with his hyperextended elbow and Wilmer Flores hit the DL with his mysterious knee infection. Travis d’Arnaud still has a sore wrist, Jacob deGrom had a stiff neck, Asdrubal Cabrera and Yoenis Cespedes both have sore hamstrings. Cabrera was able to pinch hit last night, but they said Yo was still in pain.

No Yo DL?: Do I think Yo will wind up on the DL? Nope. How do I know? Because we’re going to do the same thing we did last year. In 2016 Cespedes tweaked his quad, the Mets had him play injured, and the injury lingered all season. In 2017 Cespedes tweaks his hamstring. What do you think will happen next?