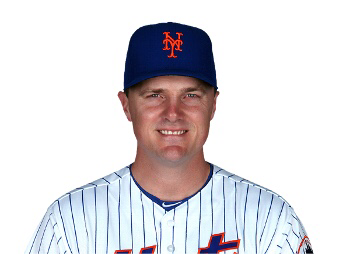 Jay Bruce being the Mets’ April MVP is the most scripted thing of all time. Many fans (not me) spent the entire offseason ripping him apart and begging Alderson to trade him for a bag of sunflower seeds. And now look at what Jay is doing. He’s cranking homers, and lately he’s providing our only offense. Last night he singlehandedly beat the Phillies with two home runs and five RBIs.

I’ve said this many times, but I’m really hoping Bruce goes full blown 2016 Mark Trumbo in his contract year and cranks like 40-50 home runs. I hope he sets the franchise home run mark. Obviously it’s unrealistic to expect that he’ll sustain this April performance. He’s streaky as hell and his performance is likely to fall off a cliff at any moment. Plus we all know the Mets are only allowed to have one hot hitter at a time. I’m sure the second someone else heats up Bruce will evaporate into thin air and hit .100 for three months.

Aggressive Yo: Speaking of Jay Bruce’s hot hitting, he really should be thanking Cespedes. Hitting in front of or behind Yoenis Cespedes is a gift from the gods. Just look at what Yo has done for Asdrubal Cabrera.

Cespedes was involved in every notable inning where the Mets scored/failed to score last night. In the first inning Asdrubal walked and then Yo hit a grounder to third base. The Phillies got the force out at second even though the second baseman came off the bag. No challenge by the Mets. Then Jay Bruce hit a double down the right field line and Yo tried to score from first. He was gunned down. I can’t blame Yo for trying to make something happen. He knows two hits in a row is an unlikely luxury with this team right now.

Scary Yo: In the 6th inning with two outs the Phillies gave up a single to Asdrubal and then they walked Yo. They wanted nothing to do with him. And right after that Bruce launched a three run shot to give the Mets the 3-2 lead.

Gsellman: Robert Gsellman had his first strong start. He pitched 7 innings, gave up 3 runs on 6 hits, and struck out 7. Terry even brought him out to start the 8th inning. After he gave up a leadoff double, Terry pulled him and brought in Jerry Blevins. Annndddd of course the pen let the inherited runner score which tied the game at 3.

Scary Yo 2.0: In the 8th inning Yo singled on a 3-0 pitch up the middle. Phils were clearly looking to walk him again. They didn’t want to let Yo take back the lead with one swing. Bruce made them pay with his second homer to make it 5-3.

Get Familia Back: This bullpen need Jeurys Familia back. He may always wind up walking a tightrope in the 9th inning, but at least he’ll give the other overworked arms a rest.

The Body Count: Lucas Duda and Travis d’Arnaud both left the game last night with injuries. Duda hyperextended his elbow on a play at first base and d’Arnaud smacked his hand/wrist against the hitter’s bat while making a throw to second base. I don’t expect to see them again this season.

Today: We need to win this series against the Phillies at home. Hopefully Noah Syndergaard comes through without losing his middle finger in the process.

One thought on “One Hot Player At A Time”