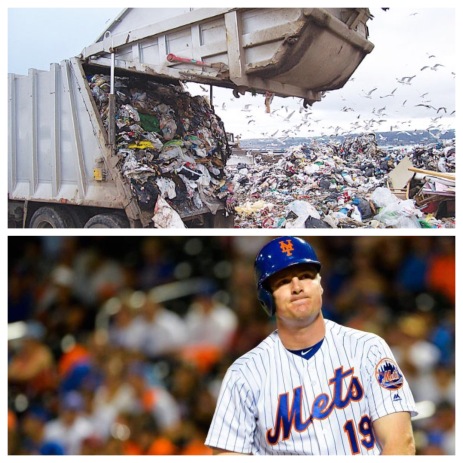 Jon Heyman recently reported that a rival executive thinks the Mets might consider trading Jay Bruce once they pick up his 13 million dollar contract option after the season. This news really isn’t all that shocking. Mets fans have been speculating for months that this might be a possibility depending on the outcome of the Yoenis Cespedes contract situation.

I want to make one thing clear though. A trade of Jay Bruce for a pitcher or position player that improves the major league roster is completely acceptable. A trade of Jay Bruce for a prospect that improves the overall depth in our farm system is also acceptable provided that the Mets make corresponding moves to enhance the quality of the major league roster in significant ways. But the Mets cannot trade Jay Bruce if they are purely being motivated by financial reasons and plan to just hand the job to Michael Conforto. I refuse to accept the narrative that many fans are citing which is “the Mets can use the Jay Bruce money to pay for Yoenis Cespedes”. The focus of the offseason should be on improving the overall roster relative to last season in an effort to win a championship. I realize every team has payroll limits, but I don’t want those limits to be the running theme that dominates the Mets offseason headlines. And so far, it has already been headline news in the form of the Yoenis Cespedes opt-out discussion and the Neil Walker qualifying offer debate.

The NLCS matchup should be an eye opener for the Mets. The Cubs and Dodgers have incredibly talented farm systems and had arguably the deepest preseason major league rosters. But it’s no coincidence that they were the highest spending teams in the NL at the end of the season. The Cubs “won” the 2015/16 offseason when they signed Ben Zobrist, Jason Heyward, and John Lackey and now they have a great chance to win the World Series. When the Cubs retained Dexter Fowler their organization didn’t worry about finding enough playing time for Kyle Schwarber, Dexter Fowler, Jason Heyward, and Jorge Soler. And the Mets shouldn’t worry either if they wind up retaining Bruce and Conforto.

The Dodgers brought in a plethora of starting pitchers (Scott Kazmir (3 years 48 million), Kenta Maeda (8 years 25 million), Brett Anderson (accepted 15.8 millon qualifying offer)) before the season started to replace Zack Greinke, and they certainly made use of their starting pitching depth over the course of the year. They re-signed second basemen Howie Kendrick and Chase Utley and turned the former into a utility player. Despite having the most regular season injuries in recorded baseball history, the Dodgers were able to survive, win the NL West, and make a deep playoff run because of their unrivaled depth.

Spending big money on payroll doesn’t always equate to success in baseball. But in 2016, the NL teams that flexed their financial muscle in the offseason and assembled deep rosters made it to the NLCS. That can’t be ignored.

Please don’t read this post and confuse me for a member of the Jay Bruce fan club. I don’t think Jay Bruce has to be on the 2017 team for the Mets to have success. And I certainly don’t want the Mets to spend money for the sake of spending money or to “make a splash”. But the days of the Mets making a purely financially motivated roster decision should be over. They appeared to be over last offseason when the Mets raised payroll and retained Cespedes. But the Mets must continue on that track if they want to win it all. Otherwise they will be at a real disadvantage when trying to overtake the Dodgers and Cubs going forward. Because those teams certainly aren’t going to stop spending like big market clubs any time soon.

Editor’s Note: This was first published on Mets Merized Online.

One thought on “A Bruce Salary Dump Would Be Unacceptable”