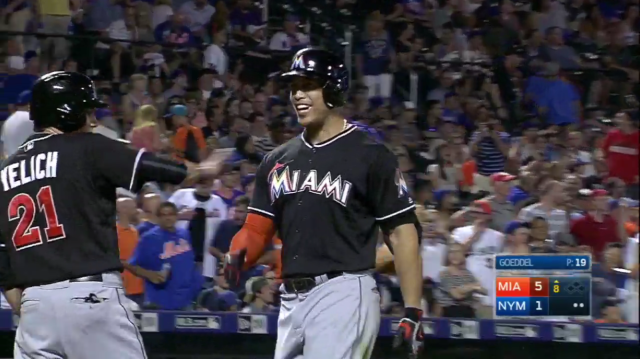 The Mets let Giancarlo Stanton beat them twice last night for some reason. That’s the story of the game. We let one of the best power hitters on the planet burn us twice. I don’t care that he’s had a bad season. I don’t care that he’s been a non-factor lately. You simply cannot let Stanton launch two dingers against you. And these were bombs with men on base no less. Unacceptable.

Matz and His Mistake: Steven Matz was lights out last night. I said this for Noah Syndergaard on Sunday, but I hope this means the cortisone is working. Whether it’s working or not Terry Collins didn’t give a crap. He saw Matz had good stuff and let him throw a 100 pitches. TC don’t give a damn about dem bone chips. Matz went 7 innings, gave up 6 hits, 2 runs, and struck out 6. The frustrating part was he got lit up by Stanton in the 7th inning. He was so close to the damn finish line. He gave up a leadoff single to Marcell Ozuna and then Stanton took him deep to make it 2-1. He had already given up a damn single to him earlier in the game. I know you don’t want to put the lead run on base, but Chris Johnson stinks. Challenging Stanton more often than not equals home run.

Yo Bomb: Yoenis Cespedes hit a solo home run in the fourth inning. He was the only guy who could hit Wei-Yin Chen. Chen straight up outdueled Matz. He went 7 innings, gave up 3 hits, 1 run and struck out 5. I suppose Chen let Cespedes beat him. But that dinger was in the fourth inning. Remember the bottom of the 7th inning? He walked Yo to leadoff the inning. It wasn’t intentional, but he sure as hell didn’t fall behind and then foolishly challenge him. I wouldn’t want to get rocked by Yo again either. Then he easily retired the next two guys. But the Marlins did luck out because James Loney singled, and Juan Lagares hit a sinking liner to Stanton in right field that he snagged for the third out. On a different day that falls in for a hit and ties the score. It wasn’t the Mets night.

Letting Giancarlo Beat You: The Matz home run to Stanton was less appalling than the bomb surrendered by Erik Goeddel. With two freaking outs, Goeddel hit Christian Yelich with a pitch and gave up a single to Marcell Ozuna. I’m not sure why with two outs the Mets are letting Commissioner Goeddel blow a one run game, but they sure did. Goeddel got behind Stanton and gave up a three run home run on a 3-1 pitch. That made it 5-1. I don’t care what the score is. If you have an open base and the option to walk Stanton and get a fresh count against Chris Johnson, you take it. Call me crazy. Call me stupid. Call me whatever the hell you want. Goeddel getting burned was an absolute lock. I was washing dishes during the at-bat with my iPad set up playing the game next to the sink. Before he even threw the pitch I was already shaking my head. It was so obvious. I can’t believe we gave into the script.

Will The Guys We Paid Perform?: I’ve complained about the performance of Antonio Bastardo and Alejandro De Aza more than a few times this season. They both got into the action last night. Bastardo pitched a scoreless inning and De Aza hit an 8th inning pinch hit solo dinger. De Aza managed to survive yesterday despite the vast majority of people calling for his head when Reyes was promoted. I was not calling for his head. You know what I’d like? How about these two jerks have a big second half? We paid these two guys. They have major league track records. They have historically not sucked. Maybe it’s time they stop sucking. I’m going to hope for that. I’ll never trust them in a big spot because I’ve already seen the ugly stretch. I’ve seen them at their worst. But turn it around. We kind of need them to work out. They were part of Sandy’s plan.

All-Stars: The All Star rosters were officially announced last night. Yoenis Cespedes will start in the outfield and Noah Syndergaard/Jeurys Familia will be on the pitching staff. They are the obvious Mets All Stars. They are the best players on the team. I hope Terry pitches the other NL arms into the ground for a change.

Reyes Return: Jose Reyes returned last night and went 0 for 4 at the plate. He didn’t get a single opportunity at third base. I really only have two points on Reyes. I’m kind of surprised we brought him back so quickly. I figured we’d give him some time to actually learn his new position and get his bat up to speed. Nope. Looks like he’s just going to do that here right when the offense finally got a little momentum. Oh well. I guess ticket sales trumped commen sense. The second point is I’m really surprised people make signs and give him a heroes welcome. It’s one thing to reluctantly accept something you have no control over. It’s another thing to essentially celebrate the return of Reyes like some sort of victory for the team and some sort of personal victory. I understand the nostalgia. I understand people getting excited because they used to root for him. But I’ve actually seen and heard people celebrating the return of Reyes like they won something. As if his return proves some point they personally were trying to make. I’m not sure what that point is and frankly I don’t want to know.

Today: It’s nice to have Jacob deGrom on the mound in a rubber game against a division foe at home. Let’s win today at 1:10.

3 thoughts on “Mets Let Giancarlo Beat Them For Some Reason”