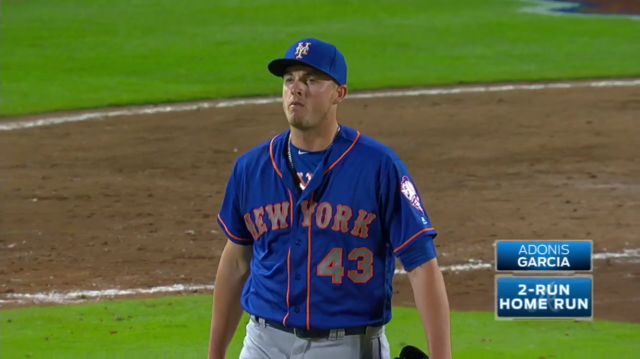 The Mets didn’t deserve to win that game last night against the Atlanta Braves. The pitching staff was getting smacked around, and the umpires gave the Mets a huge break. But that doesn’t matter. The Mets were in a position to win, and they still blew it. We just had a great home series sweep against the Royals, and then we come out the gate at Turner Field and blow the freaking game? Ridiculous. The Mets are 5-5 against the Braves. The Braves are the worst team in the NL. If the Mets aren’t going to beat the Braves this year, then the season is already over. We talked about this before the season even started. We have to beat the NL Least and beat those teams more often than the Nationals. This was another pathetic inexcusable loss, and the losses of that variety have been piling up lately. This team hasn’t been resilient or consistent. We’re supposed to be contenders. We’re supposed to have class. But lately we’ve been bums.

Alejandro Baby: In the top of the second inning, Michael Conforto walked and with one out Alejandro De Aza launched a double to bring him home making it 1-0. Alejandro De Aza went 2 for 4 in this game and made three really nice plays in center field. It’s about damn time that this guy contributed.

Thanks Bonifacio: In the third inning, Asdrubal Cabrera led off with a double and advanced to third on a James Loney line out to center field. Then Neil Walker hit a shallow fly ball to left fielder Emilio Bonifacio who nearly lost the ball in the wind and then made a horrendous throw nowhere near home plate. It was a gift sac fly thanks to Bonifacio’s spaghetti arm. Thanks Emilio.

Singles Not Dingers: In the fifth inning, the Mets did something they never do. They scored on singles instead of dingers. Curtis Granderson singled with one out, and then with two outs James Loney singled to make it first and third. Then Neil Walker singled to drive in Grandy. That gave the Mets their third run.

Dark Knight No Mechanic: Matt Harvey struggled with his mechanics again. He went 6 innings, gave up 8 hits, 2 runs, and only struck out 3. He struggled in the first inning when he gave up a leadoff single to Jace Peterson, but then he picked him off. Then he gave up a single to Ender Inciarte, but he retired the next two guys. He gave up two straight two out singles in the second inning but retired the pitcher to escape that jam. In the third inning, De Aza made a stellar catch to prevent a Jace Peterson double. In the fourth inning, Nick Markakis doubled, and with one out A.J. Pierzynski singled him in to make it 2-1. To end that inning, Michael Conforto made a stellar catch against the left field foul wall. Harvey neded tons of help to get through these arduous innings. In the sixth inning, Nick Markakis hit a one out single and advanced to second base on an Adonis Garcia slow roller to Matt Harvey. Then with two outs, A.J. Pierzynski doubled Markakis home to make it 3-2 Mets. For the record, Pierzynski sucks. He’s hitting .200. But he sure as hell doesn’t suck against the Mets.

Home Plate Play: In the top of the 7th, the Mets had a chance to score some more runs with two outs. James Loney walked with two outs and Neil Walker singled to set up first and second for pinch hitter Wilmer Flores. Wilmer failed to come through. In the bottom of the 7th inning, Terry pulled Harvey with 91 pitches. Some might call that an early hook, but not based on the way Matt was pitching. He looked like crap, and I had no confidence that he was going to get out of any inning let alone the 7th inning 91 pitches deep. So Terry brought in Sean Gilmartin (I guess because everyone else was dead?). Gilmartin proceeded to walk Emilio Bonifacio and give up a single to pinch hitter Jeff Francoeur. Jace Peterson then sacrificed the runners over to second and third. Ender Inciarte then hit a ball to Michael Conforto in left field foul territory. Conforto caught the ball for the second out and made an incredible throw to home plate to nail the tagging Emilio Bonifacio. The only problems were 1) Travis d’Arnaud kind of blocked the plate illegally and 2) Emilio Bonifacio kind of slid in safely anyway even though it was a horrendous slide. The Braves challenged, and the umpires reviewed the play. I figured the call would be overturned and it would be 3-3 Braves. Luckily for the Mets, the umpires continue to blow calls every single day. Either the umps were punishing Bonifacio for his terrible slide or rewarding Conforto for his fantastic throw, but they made the wrong call on the field and confirmed the wrong call. They didn’t even defer to the “not enough evidence to overturn the call” mantra. Nope they felt it was obvious that the runner was out. I’m happy the Mets got the break (this time), but it’s ridiculous that these guys can’t make the right calls with replay. Absurd. Obviously the Braves manager got tossed.

We Blew It Anyway: After that huge break from the umpires the Mets went ahead and blew the game anyway. Jerry Blevins started the 8th inning and gave up a single to Freddie Freeman. It’s tough to get mad at Blevins because he’s been great all year. But a leadoff hit was brutal. Then with one out and Freeman on first, Terry went to Addison Reed. Reed gave up an 0-2 two run shot to Adonis Garcia. It was a terrible 0-2 pitch right over the middle of the plate. He tried to get it up and completely missed. I realize Reed has been fantastic this season, but your setup guy blowing a game against the worst team in the league stings like hell. A mistake pitch on an 0-2 count is a joke. Anyway that made it 4-3, and that was the ball game.

D’Arnaud Taking Names: Travis d’Arnaud threw out a base stealer last night in the 8th inning. I think it’s the second guy he’s nailed since returning. I guess his shoulder feels better. For now.

Lucky Bastards: The Braves had 12 hits yesterday, but a bunch of balls just managed to find holes. Lots of cheap lucky hits. And the Mets crushed a bunch of balls that just found gloves. Unlucky night for the Mets.

Thor Blames Workload: Noah Syndergaard indicated that his labor intensive start against the Pirates where he threw 115 pitches may have led to his struggles/elbow soreness in his start against the Royals. Ummm that’s Terry’s fault bro. TC needs to handle these guys with care. Not most of the time. Not some of the time. All of the damn time. If that means cap them at 105 pitches you do it. The guys who study this crap know that high stress pitches late in games lead to the arm injuries. It’s science. So let’s avoid those situations all the time. Okay TC? I’m looking at you moron.

Jose: Jose Reyes is officially going to be released on Saturday. The Mets/Reyes reunion is being rumored as inevitable at this point. I wrote my thoughts on the potential reunion earlier in the week. Let’s wait and see what happens.

One thought on “The Pathetic Inexcusable Losses Are Piling Up”