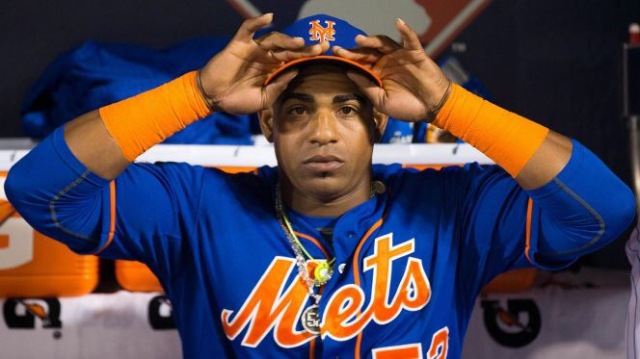 Well so much for competitive baseball against another elite team. That was an absolute blowout. 12 run third inning?!? The third inning scoring went like this: Michael Conforto doubled in a run. Yoenis Cespedes singled to drive in two more. Neil Walker doubled to drive in Cespedes. Asdrubal Cabrera doubled in two more. Curtis Granderson singled in another. Then Conforto checked back in with a single to drive in another run. And that set the stage for Yoenis Cespedes’ grand slam. That made it 12-0. There’s really nothing else to tell. The 12 run inning was a franchise record. The 6 RBIs in one inning by Cespedes was a Mets record. We destroyed the Giants tonight.

Locked In: Umm remember when we were worried about the offense during the first two weeks of the season? Well we are locked in now. Cespedes is so good. Thank you Sandy.

Old Man Peavy: Steven Matz got out of early trouble, but overall looked great tonight. Jake Peavy and Mike Broadway did not look great. Old Man Peavy really has lost a few steps and a few MPH on the old fastball. He should really take a page out of Bartolo Colon‘s playbook and get stem cell injections and eat baby fetuses for breakfast or whatever the hell he’s been doing the last 5 years.

Dee Listed: Speaking of cheating, Dee Gordon was suspended for PEDs today. The only thought I’ll offer here is…duh. He was a mediocre at best speed guy, and then he magically won a batting title. Duh. That being said, I have a lot of thoughts on the juice. Just as George R.R. Martin says the Winds of Winter is coming, so is my post on Dee Gordon and steroid use.