Well we dropped two of three to the “terrible” Phillies at home. What a joke. Stanky Jeremy Hellickson carved us up like a cake. It’s really my fault. I told everyone not to read into the spring. I guess spring games do matter because our offensive problems have carried right into the regular season. Although the TV man said we started 2-3 in 1986 and in 2015. So now I don’t know what to believe. My Sunday plan was to watch the Mets win and then pop on something funny. Maybe some Seinfeld or The Office. Keep the mood light all day. A nice little Sunday on the couch. After this loss, I’m going straight to Law and Order: Special Victims Unit. It’s officially a “vicious felony” kind of day.

Matt Harvey was sharp enough today, but once again not at his absolute best. He gave up a couple of singles (including one to the pitcher) in the 3rd, and then a sac fly to Freddy Galvis. Odubel Herrera hit a two run bomb off of him in the 6th to make it 3-0. Once again, our offense was stagnant most of the game. But in the bottom of the 6th inning with two outs, David Wright hit a double and then Yoenis Cespedes on the 11th pitch of an amazing at bat, hit a 2 run jack to drive Jeremy Hellickson out of the game. That made it 3-2. We may not be producing offensively thus far, but it’s nice to have guys who consistently put up major league at-bats. Yoenis Cespedes, Michael Conforto, Neil Walker, and the rest of our guys all hang in there and consistently have professional plate appearances. It’s such a refreshing change from the 4 pitch ABs that Kirk Nieuwenhuis and Eric Campbell had so often last year.

Jim Henderson looked great again in the 7th inning and after that mediocre 8th from Addison Reed, Jim may earn himself a promotion to setup man before long. As long as his shoulder is still attached by the end of May. Also, my first reaction when the bases were loaded for Ryan Howard in the 8th was, “Where is Jerry Blevins?” I guess Terry preferred Reed vs. Howard over Blevins vs. Darin Ruf. It’s crazy that at this point in his career, we’d rather face Howard. Oh how the mighty have fallen. Reed ended up getting the sac fly to limit the damage, so the point was ultimately moot. Also, speaking of Jerry Blevins, he kind of looks like Henderson. I guess it’s a little bit of a stretch, but they are both skinny long necked bearded brachiosaurus types.

Week Old Slice: So I must admit, I had a bad feeling about this game long before it was over. Around the 6th inning I started rummaging through the fridge, and I snagged a week old slice of pizza for lunch. It had an unusual cheese on it. Not your typical Parmesan or mozzarella. Anyway it wasn’t smelling 100%. But I figured I was going to feel like crap after the loss anyway so I popped it into the toaster oven and went to town. So far so good. 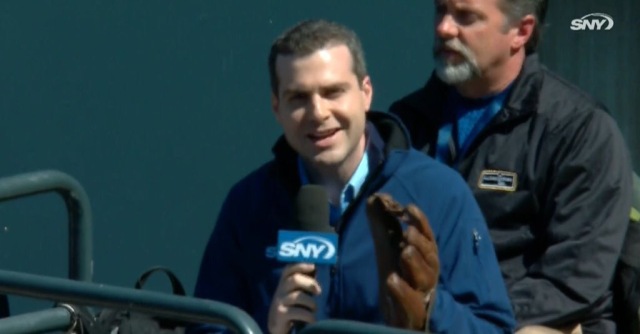 Steve Gelbs Segment: I took a bathroom break around the 3rd or 4th inning when Steve Gelbs popped on the screen for an update. I cranked the volume on the TV so I could hear it from the bathroom, but I couldn’t make it all out. Then I came back, and Gelbs was wearing an antique glove ranting about war heroes or something. I miss our Emmy nominated golden boy Kevin Burkhardt. Those eyes of his could make anything interesting. But I have to remind myself that some birds aren’t meant to be caged. Their feathers are just too bright.