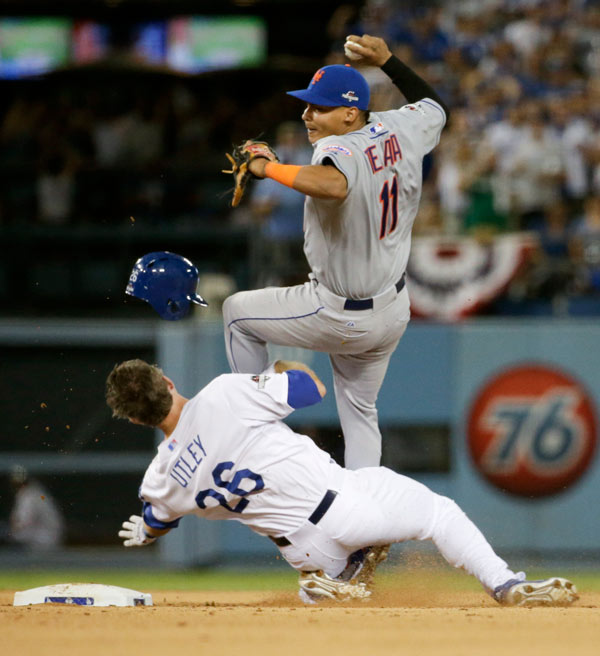 It wasn’t too long ago that Yankee mole and MLB Chief Baseball Officer Joe Torre sat at a podium shortly after Ruben Tejada had been demolished by Chase Utley‘s filthy takeout slide during Game 2 of the NLDS. At that press conference Joe babbled on and on about the play all the while failing to offer coherent sentences explaining the definition of a legal slide or what exactly constituted the “neighborhood play” under the rules.

At that time Joe (i.e. The Head of Rules) said he was “digesting” the legality of the slide (probably as Ruben was digesting his hospital food), but he assured fans that Utley would be appropriately disciplined and that MLB owners would discuss potential rule changes during the offseason. Well as we all know, Joe failed to live up to his first promise when he handed Utley a meaningless 2 game suspension that wasn’t even implemented during the series.

However, last week Major League Baseball owners had a chance to make good on the second promise when they met Wednesday and Thursday at some retirement community in Florida for their annual meetings.

And it wasn’t just the rules around takeout slides up for discussion. These rich old coots had a lot to cover including:

Anyway after two full days of discussions, the owners had the following to show for it:

Wow!!!! Talk about unbelievable progress. These guys can really cover some ground in between shuffle board matches.

So there was absolutely no progress whatsoever made on any of the issues on the agenda. After dirty takeout slides ended the season for both Ruben Tejada and Pirates star rookie Jung Ho Kang, the league has decided rather than at least clarify the existing rules it’s better to just let this one play out. Thus ensuring that next season we will almost certainly experience multiple takeout slide related injuries and an equal amount of umpire crews just shrugging and hoping to reach a representative at the MLB Replay Call Center in New York. “Representative!! Rep-re-sentative!!”

In regards to implementing the DH in the NL, Commissioner Manfred offered this incredible insight, “It is the single most important feature that defines the differences between the two leagues.” Ummm wait, wait, slow down. So the DH is something that is different between the American League and the National League? Ok I think I understand. So the rules are not the same right now. Got it. He then added “The most likely result on the designated hitter for the foreseeable future is the status quo.” Gotta love the old status quo.

And by the way, the most hilarious part about the NL considering the implementation of the DH is the main reason behind it. They want to prevent injuries to pitchers. So we have second basemen and shortstops breaking legs and baserunners getting concussions on takeout slides, but we are more concerned about pitchers pulling their hamstrings as they run to first base. Well either way the important thing is that the league decided to do nothing.

The proposed “enhancements” to instant replay, centered on the owners’ desire to change the practice of overturning “safe” calls when it’s determined that the runner has in fact lost contact with the bag. I can’t even begin to try and offer you an explanation for why they want to stop umpires from getting these calls right. I’m guessing it has to do with their favorite pace of play debate. And quite frankly with so many of these owners on the verge of death, I can understand why they are prioritizing speeding games up.

Now it’s not fair to criticize the owners on everything. They did have a few major accomplishments including moving this year’s trade deadline to August 1st to avoid having it on a Sunday and the appointment of salty Cubs co-owner Tom Ricketts to the MLB small council. He will join current Master of Coin Fred Wilpon as another esteemed member of the committee.

And before it was all said and done the focus of the meeting turned to revenue sharing (i.e. a great debate about how the owners planned to split the tab for the entire event).  Obviously Fred Wilpon got up to use the bathroom when the tab was being settled only to return with promises of “getting it next year”.

2 thoughts on “What Happened to Banning Takeout Slides?”