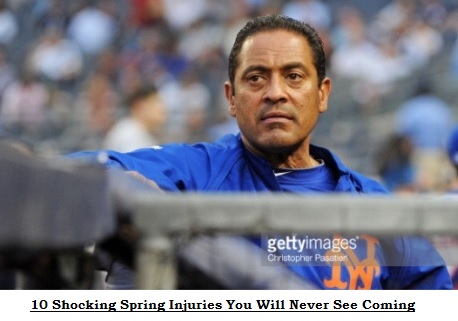 The nature of these Mets injury cover-ups will absolutely shock you. The details are so horrifying that you may never think of the team in the same way again. The information is being concealed all the way at the top of the….

Am I in the clear? Did that little preamble surpass the character limit on the sites that show blog samples? Well if not, oh well. Y’all got clickbaited baby! The truth is there are no shocking injuries in Metsland. Mets fans ALL know the injuries that are coming. Sandy knows. Terry knows. Ownership knows. Everyone knows.

Zack Wheeler stopped his bullpen session yesterday due to tenderness in his elbow. The Mets say it’s no big deal. This shutdown should come as a surprise to literally nobody on earth. Zack was the unquestioned lock to be the first member of #TeamTender. Lock city. He’s the only guy on our team that has somehow played less than David Wright (another injury lock) over the past two years.

As far as the rest of the pitching staff goes, they are all injury risks. If any of them are dealing with residual injury issues by Opening Day, the team isn’t allowed to shrug and say “never saw that coming.” Would it really be that surprising if at the end of March Matt Harvey is still recovering from thoracic outlet syndrome surgery, Wheeler still can’t pitch, and Steven Matz has a sore shoulder? I’m certainly not wishing that on any of these guys. I’m being realistic. I’m literally just citing the injuries they dealt with all of last season and assuming that there may be some lingering issues.

As far as the bullpen goes, Jeurys Familia may not be an injury risk, but he’s a lock to be unavailable on Opening Day. He’s getting suspended. The team knows this. For some reason fans don’t seem concerned by this at all because they are assuming Addison Reed is going to 100% duplicate his career best 2016 season. That’s not even close to a guarantee, but even if it was the team is going to have a tough time replacing the innings of the suspended closer. And if the rotation fears mentioned above come to pass, you can forget about Seth Lugo or Zack Wheeler picking up the slack in the pen.

At least the position players are safe right? Wrong. David Wright hasn’t thrown a baseball. That was the first lock of Spring Training. I actually read articles yesterday where people are proposing we try playing Wright at first base. Ummm he can’t play anything. Why would we think first base would be any different at all? He can’t throw a BASEBALL.

Who’s next? Come on, you know the answer. Go ahead and say it. Travis d’Arnaud! If Mr. Glass goes down with some injury like he always does, I’m sure it’ll be the week after the Nationals sign Matt Wieters to some cheap one year deal. Yup. We’ll be rolling with Rene Rivera and Kevin Plawecki, and the organization will pretend they never saw it coming.

I’m not even going to get into the risks around Lucas Duda, Neil Walker and the rest of #TeamCrackedBack or the risks of Jose Reyes (aka Senor Hammy Strain) running around like he’s 20 years old in the World Baseball Classic.

The bottom line is we must pray for health. But if/when the injuries strike, please don’t act surprised and let the organization off the hook. I wasn’t clamoring for the team to sign players and make trades all offseason just for the fun of it. I was begging for it because our roster (although seemingly deep) is filled with fragile young pitchers and aging position players, and the injury risks are already starting to show in week one.