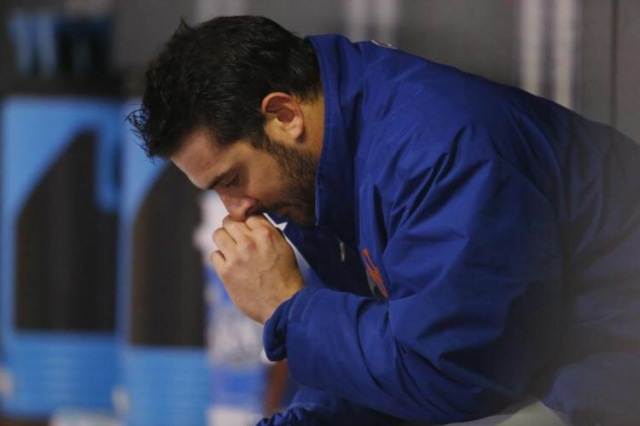 The Mets officially placed Matt Harvey on the 15-Day DL. This isn’t surprising at all considering he’s been inexplicably struggling all season. Despite his insistence that his underwhelming performance this year was stemming from mechanical flaws, I think most of us had a gut feeling it was due to some physical issue. The early reports are concerning to say the least. He’s going to see the doctor in St. Louis that performed that shoulder blood cot surgery on Dillon Gee. The guy is a vascular surgeon specializing in thoracic outlet syndrome and other blood-flow ailments. I’m no scientist, but I’m pretty sure shoulders need blood. And more blood clots? First the pee clots and now in the shoulder. Sweet Jesus this man can’t catch a break in 2016.

Grab your rosary beads. Light your prayer candles. We’ve survived without Harvey performing on the mound this season. But this goes beyond the team and our 2016 performance. Shoulder problems are bad. They are career derailing bad. Chris Young battled shoulder issues forever. Johan Santana never came back after his shoulder gave out. Let’s hope it’s minor. Right now the Mets say it’s precautionary. Let’s hope the doctor’s visit shows that his blood flow is fine. But if he needs some kind of shoulder surgery…Sheeeeeiiit. That would be terrible.

In the interim the Mets will call up Seth Lugo to take Harvey’s roster spot. If he winds up being out for a long stint, I have to believe there’s a chance we’ll see Robert Gsellman or maybe Gabriel Ynoa. But they might just stick with Sean Gilmartin or Logan Verrett too. Hopefully Zack Wheeler comes back soon. For now, forget about the contingency plan and let’s focus on prayers for the Dark Knight.