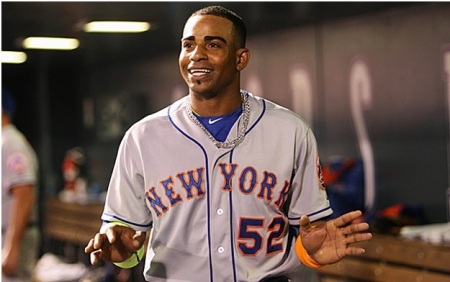 It’s not easy to completely change the outlook for and performance of a baseball team. Yet that’s exactly what Yoenis Cespedes did almost overnight when he arrived on July 31st 2015. His offensive talent represented something Mets fans hadn’t seen since Carlos Beltran and before that Mike Piazza. His post trade offensive numbers speak for themselves. 17 home runs. .942 OPS. 57 games. He catapulted a near .500 team to 90 wins and took the offense from worst to first. But it wasn’t his talent, the eventual NL East crown, or the run to the World Series that had the greatest impact on the franchise. It was what his acquisition meant. He gave fans a glimmer of hope. He represented the possibility that the culture of hopelessness fostered by the post-Madoff Wilpons was finally over. This was the first piece of evidence that fans could point to in order to show that Fred and Jeff were finally going to fulfill their promise to open their wallets once the pitching talent arrived at Citi-Field.

And today after nearly three months of Mets fans breaking the internet with #signCespedes #keepYo our prayers were answered. Today represents the biggest victory to date over the tyrannical reign of the Wilpons. Fred and Jeff tried everything in their power to prevent this day. They made their case: unwavering stances against long term deals, BS excuses about Cespedes’ dugout chain smoking habits, allusions that he was a diva. But in the end all it took was 3 months of relentless pressure from the fan-base and Cespedes’ unprecedented decision to pass on a $100 million dollar deal. He passed on a long term deal. Think about that. The only reason he is here is because he became the first player since Cuba Gooding Jr. in Jerry Maguire to pass on the guaranteed deal and bet on himself. And even Cuba only passed because he was getting low-balled.

I’ve seen players take “pillow contracts” when they are coming off an injury or after a subpar season when there’s a limited market for their services. I have even seen hometown discounts like the one Alex Gordon just took where the player passes on a few million dollars or takes one less year to make a deal happen. But nobody has ever passed on a deal for the money they wanted and for the years they wanted, from a team in the same part of the country as the one they were on, or with a championship caliber roster. Why? For seemingly no reason other than “Me gusta Nueva York y Los Mets.” But Cespedes did. Nearly four months after arriving in New York and saving our season he has returned to do it yet again. He has returned so Mets fans can finally flip off the Wilpons with a smug grin on their faces and scream “YES WE CAN.” He has returned to serve as the face of the franchise and take the pressure of our elite pitchers so they can finally just dominate in peace. So soak in this moment folks. Channel your inner Cespedes and light up a toasty rich Marlboro Red cigarette. Breathe it in deep– this may finally be our chance to reach the Promised Land for the first time in 30 years.

There’s ice on CitiField tonight. And with the return of La Potencia and the Wilpons finally cutting a check it appears hell has finally frozen over.