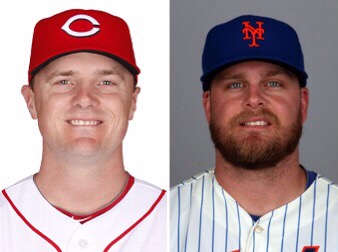 I’ve always wanted the Mets to acquire Jay Bruce. Not just because of his prolific power. I’ve always wanted him because Bruce and Lucas Duda are both left-handed hitting National League Neanderthal sluggers. #LucasSmash and #BruceBash. Now we finally get to see the power duo join forces. And by that I mean we hope to see them join forces when Lucas Duda’s cracked back heals. But the Mets officially acquired Bruce for Dilson Herrera and minor league pitcher Max Wotell. The original deal was for Brandon Nimmo and two minor leaguers. But of course that deal was scrapped because one of the low level minor leaguers coming from the Mets had medical issues. Is there a single healthy player in the Mets organization that can play or be traded? Every major leaguer goes on the DL and now the minor leaguers all have medical issues? It’s insanity.

I’m a little surprised the Mets dealt Herrera. They must have soured on him as the heir apparent at second base. That being said, it’s not like second base is a big problem considering we have Jose Reyes, Wilmer Flores , and Neil Walker (who we can easily re-sign). Bruce leads the NL in RBIs. He’s hitting .265/.316/.559 with 25 homers and 80 RBIs. This is a great pickup. I don’t care that we have a bunch of corner outfielders. I’m pretty sure we can find a place for him in our lineup. That place will obviously be 4th in the order. I really hope this doesn’t mean that Yoenis Cespedes will be placed on the DL because of his balky quad. We shall see.

The Good News: The addition of Bruce is obviously great for the 2016 Mets. He will certainly help boost the offense. I realize he’s a terrible defender, but the quality of our defense doesn’t really matter if we can’t score a single run. Judging by all the acquisitions we’ve made this season, Jay Bruce will be on the first rickshaw out of Cincinnati and will join the Mets in roughly two weeks.

Going forward this gives the Mets Jay Bruce, Lucas Duda, Curtis Granderson, Asdrubal Cabrera, and Jose Reyes all under contract for one more season. If the Mets like that crop of players for 2017 then that’s fine. If they want to shake things up, they have lots of attractive trade chips to potentially flip for other major league players that fill different needs.

The Bad News: The bad news is this reinforces what I’ve been saying for months. The Mets now have their “contingency plan” when Yoenis Cespedes opts-out of his contract. As soon as he opts out the Mets are going to say, “Well we have three corner outfielders (Bruce, Michael Conforto, and Grandy) and only two corners. Gotta let him walk. What else can we do?” They are going to say Yo refused to play center field. They are going to say he’s injury prone (instead of acknowledging he’s a damn iron man warrior). Whatever. I’ll worry about that when the time comes, but the Mets must keep Yo.

Another Boost On Offense: Jay Bruce is a nice addition, but I’m hoping the Mets have re-acquired Neil Walker’s bat for the rest of the season. He’s been hot lately. That would be a huge boost to this offense.

Instagram: Curtis Granderson is going to have to update his WeFollowLucasDuda Instagram account to include Jay Bruce now that the two giant lefty cavemen sluggers will share a locker room. Also, Grandy is going to have to find someone else to run the account when the Mets trade him in the offseason to solve our new outfield “logjam”. For the record other teams call this logjam depth.

Long Story Short: I’m happy. Adding a new talented player makes me happy. The trade deadline makes me happy. One day I’d like to be the guy that works for an MLB team and leaks everything to the media. The Julian Assange of Major League Baseball. I’ll be the best damn leak in the business.